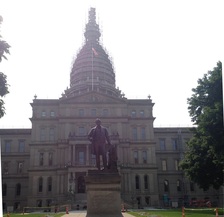 Following a tawdry marital infidelity and cover-up scandal that has dominated state Capitol headlines since early August, freshman state Rep. Cindy Gamrat (R-Plainwell) was expelled from the House of Representatives on Sept. 11, 2015.  Rep. Todd Courser (R-Lapeer) stayed “one step ahead of the sheriff” by resigning moments before a House vote that would have expelled him too (roll call vote here, text of expulsion resolution here).

When a legislator is expelled, the bills he or she introduced in that session can still be taken up and passed by the legislature. For reputational and human-nature reasons this is unlikely, however. Specifically, other politicians are hesitant to associate their names with a disgraced former member by championing one of his or her bills, and committee chairs are unlikely to take up and advance the bills for the same reason.

Therefore, legislation introduced by Courser and Gamrat have become orphan bills, or perhaps zombie bills — not dead but not likely to show any signs of life, either. This may be the most substantive outcome of the forced departure of the two legislators.

Below are the newly orphaned measures, listed with their MichiganVotes.org taglines. Click on a bill to see its concise MichiganVotes description. You can also review Courser's and Gamrat’s complete voting record here and here, respectively.