However, not all reforms are cuts 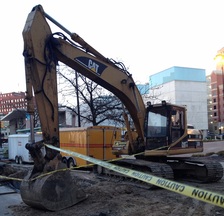 For two decades the Mackinac Center for Public Policy has recommended repealing the state’s prevailing wage law. It is an expensive mandate that artificially raises the cost of state-funded construction projects. Bills to make prevailing wage an artifact of history have been adopted by the state Senate.

Mackinac Center research suggests repeal will eventually free up money for more road, school and other government construction projects. It's an example of how not all reforms that impact the budget are actually "cuts."

With road construction and repair a topical issue some may regard repeal as akin to just cutting one department’s budget and shifting those funds to roads. That is not the case. In fact, savings accrue to new projects going forward.

One important caveat with repeal is that no federal money could be commingled with state dollars on state road projects. Federal dollars bring with them the Davis-Bacon Act wage mandates, which are the federal version of prevailing wage.

Yet repealing the prevailing wage law can still make road projects less expensive. Unlike state road projects that include federal dollars, only one-third of roads managed by counties, cities and villages are eligible for federal funding. Those roads also are in need of repair, with around 47 percent rated in poor condition. Getting rid of prevailing wage mandates will help local road managers stretch tax dollars further.

School infrastructure funding does not have Davis-Bacon mandates hanging over it. If prevailing wage is successfully repealed, the cost of future school projects could fall by as much as $224 million annually, according to the Anderson Economic Group.