Where is that 'tax cut fever' you promised? 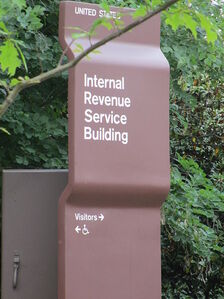 The IRS (via Joshua Doubek at Wikicommons).

Nearly a year ago, popular Michigan pundit Tim Skubick opined on MLive.com that “another disease is starting to make the rounds in this town (Lansing): Tax Cut Fever.”

Personally, this observer welcomed the prospect of a bipartisan frenzy to convert a projected state budget surplus into tax cuts, even if the politicians’ motives included wanting to “help cement their 2014 re-election bid …”

The promise was especially welcome given that Lansing then looked more ready to raise taxes than cut them. I pointed out some examples in an article published last January. Among them:

The Legislature had recently enacted $82.6 million in fee hikes. It had also granted certain local “Business Improvement Zone” authorities the power to levy additional property taxes. And there was plenty of chatter about imposing taxes on Internet transactions (an Amazon tax) and other new extractions.

Moreover, a 2007 promise that Gov. Granholm’s big income tax hike of that year would be rolled back to 3.9 percent beginning after she left office never happened. Instead, we got a 0.1 percent rate cut, from 4.35 percent to 4.25 percent, with further baked-in reductions repealed. Some fever!

Nevertheless, Skubick predicted that the chair of the Senate Finance Committee, Sen. Jack Brandenburg, R-Harrison Township, would “breeze back into town next month, dust it (an old rate reduction bill) off and get the tax cut ball rolling.”

Alas, the bill he referenced — to restore those canceled future income rate cuts — may have been dusted but it never left committee.

Maybe there was other evidence of the “fever” Skubick expected? None was found in a search of the Michiganvotes.org web site for all the bills in the “tax” category. This revealed 236 bills introduced in 2013 — a non-election year — but just 150 this year. The temperature appeared to be cooling, not heating up.

Most of those tax bills proposed minor regulatory changes or modest “boutique” credits or exemptions. Worse, some proposed substantial tax hikes, not cuts. For example, three 2014 bills proposed new or increased levies on e-cigarettes and certain commercial and industrial property, respectively. That suggests a “fever” all right — but for hikes not cuts.

To be fair, other new tax proposals were both substantial and widely perceived as deeply political, such as bills to expand the homestead property tax credit and exempt certain pension income. Rate cuts are a much better idea than credits and extensions. (Read more about that in the Capitol Confidential article, “Why Tax Rate Cuts Matter More than Increasing Credits and Exemptions.”) And the Legislature did adopt bipartisan cuts to property taxes imposed on business tools — a levy universally regarded as unwise and counter-productive — which voters approved in August.

But still, none of that suggested an imminent outbreak of across-the-board tax cut fever in Lansing.

Hope springs eternal, however: This taxpayer and millions of others in this state eagerly await the arrival in Lansing of a tax cut epidemic. If anything, sadly, the upcoming lame duck session seems more likely to see the rumored tax cut virus mutate into a real tax hike bug.