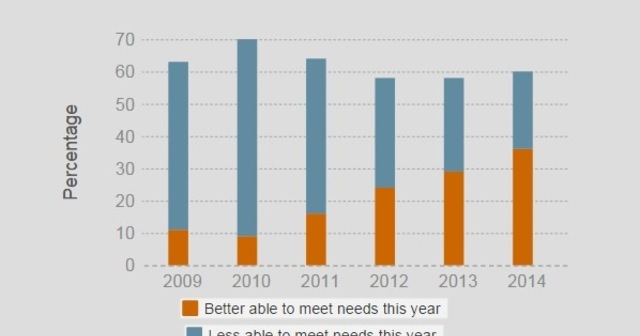 A new survey of communities from the Center for Local, State and Urban Policy at the University of Michigan shows an uptick in the percent that say they are better able to meet their fiscal needs. This is good as it generally tracks with an improving state economy, but there are some warning signs ahead.

The survey notes, “For the first time in six years, more Michigan communities report that they are better able to meet their fiscal needs this year than those who say they are less able to do so.” (See chart nearby.) 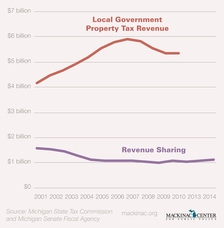 This pushes back a bit against the frequent claims that local municipalities are “starving” for revenue. A full look at the numbers shows that revenue for local governments has stayed relatively stable, even amid the economic “lost decade” in Michigan. As noted in a recent CapCon article:

But many local governments will be facing ongoing fiscal problems. In cities, counties and townships around the state, retirement liabilities are eating into budgets. Some public entities are confronting this head on while others are putting off the problems for future elected officials (or unelected if the fiscal problems get too bad).

So while many local units haven’t seen a collapse in revenue, there has been a shift in where that money is going — often from public safety and parks to the liabilities of former employees. Those communities that confront this head on will be in better shape in the years ahead.