Feeling Fine About the End of the World 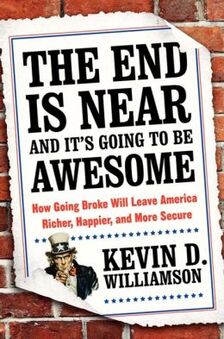 Back in the days of classic British humor, a comic impersonating an unctuous variety host proclaimed: “Ladies and gentlemen, Petula Clark sings!” To which another comic responds sotto voce, “Yes, we know that.” I was reminded of this bit while reading Kevin Williamson’s “The End Is Near, and It’s Going To Be Awesome.” Those familiar with Williamson’s prodigious output neither will be surprised by the title’s first clause nor the glib nature of the second. Simply put, ladies and gentlemen: Kevin Williamson is apocalyptically anarchistic. But most readers knew that already.

Williamson, who recently discussed his book at a Mackinac Center Legacy Society luncheon, presents mounting evidence the United States is nearing a reckoning both financial and behavioral, but waits until the last pages to explain why this might be awesome. Like Petula Clark, readers know that she sings, but we’re left wondering whether she’ll perform “Downtown” or “Don’t Sleep in the Subway.” Williamson presents the same quandary vis a vis the awesome part.

Williamson abjures the approaches normally taken for a book of this sort. While chock-a-block with political science, history both distant and recent, law and economics, “The End Is Near” is literary in its approach. This shouldn’t surprise those familiar with Williamson, who arrived on the scene with an English degree, and freely alludes to works by John Milton and T.S. Eliot (not to mention Jewel and “Who Moved My Cheese”). Every movement needs its poets, after all. As Percy B. Shelley recognized, poets are the unacknowledged legislators of the world, and Williamson is one such specimen. It is because of this approach that this fellow student of literature recommends the book.

Williamson seemingly enjoys placing counterintuitive theories in the middle of his texts. For example, he writes “failure is what makes us rich.” Alluding to the concept of Joseph Schumpeter’s creative destruction, he explains:

We’d all be a lot worse off if corporations such as U.S. Steel did in fact live forever. Obvious counterexamples include Amtrak and the U.S. Postal Service, two institutions that would have failed long ago if not for government support – subsidies for Amtrak, the government-chartered monopoly on letter delivery for the postal service. The cost of their corporate immortality is not only the waste associated with maintaining them, but the fact that their continued existence prevents the emergence of superior alternatives.

Compare this with McDonald’s and iPhones. Both, writes Williamson, are products…

…of evolution, highly refined by countless tiny revisions through dozens of iterations moving toward a more perfect expression of its ineffable … ethos – by no means moving in a straight line, but guided by the gift of failure in the direction of less wrong. Over time, less wrong looks pretty good: Look in your pocket. Look in the mirror: You’re a big improvement on Homo erectus.

After showing the wide differences between public boondoggles and private enterprise, the author goes in for the philosophical coup de grace:

The problem of politics is that it does not know how to get less wrong. It is as a practical matter impossible to design a national health-care policy that can be tweaked and improved every quarter, or on-the-fly in real time as problems are discovered, as software is. It is nearly impossible to imagine political institutions creating something like a software-update feature for Social Security or the War on Drugs. Resistance to innovation is a part of the deep structure of politics. In that, it is like any other monopoly. It never goes out of business – despite flooding the market with defective and dangerous products, mistreating its customers, degrading the environment, cooking the books, and engaging in financial shenanigans that would have made Gordon Gekko pale to contemplate.

Politics is a kind of island in the evolutionary stream—isolated, unchanging, incapable of learning because it is insulated against going extinct. Politics is the last monopoly, the Immortal Corporation. You’ll never see a capitol building with a GOING OUT OF BUSINESS sign hanging out front—even genuinely bankrupt, undeniable insolvent political regimes from Argentina to Greece for the most part go on about their business, even after defaulting on their financial obligations.

We have better phones, better cars and other consumer goods than in the past, says Williamson, but we’ve nothing to look forward to but politics as we’ve always known it. Or worse.

Williamson goes to great lengths to show how increasingly militarized our government agencies have become. He notes the U.S. Dept. of Education recently purchased “a few dozen Remington 12-gauge shotguns with 14-inch barrels.” These sawed-off shotguns were deployed by a DOE tactical unit against a single father with three children in a 2011 attempt to arrest the man’s ex-wife regarding a student-aid issue. The benign-sounding Social Security Administration trumped the Department of Education by purchasing 174,000 .357 hollow-point pistol rounds. Dodge your taxes and you might end up with a prison sentence double the average amount of those convicted of homicide (5.5 years is the national average). Government, Williamson reminds us, is never less than the threat of violence and oftentimes more.

“They got the guns/but we got the numbers,” sang Jim Morrison of The Doors, and Williamson echoes the sentiment. The “awesome” of the book’s title is the 300-million-strong U.S. population that might, in part, tire of ever-growing Leviathan enough to say … well … “Enough.” He ponders what would happen if, say, one-tenth of the U.S. population refused to pay their taxes, or performed any other coordinated act of community civil disobedience. The time is approaching he says, when the End in which we find ourselves might justify such extraordinary means.