Michigan Auto Insurance Reform a Must 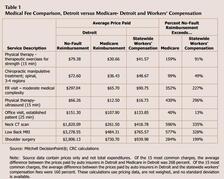 As it is, ill-conceived state mandates cause Michigan drivers to pay among the highest insurance costs in the nation for the coverage they receive.

The Citizens Research Council released a study recently examining why the system is so expensive. The details are complicated, but in the end it comes down to basic economics.

Michigan is unique among states in that it requires personal injury protection coverage for all drivers, allows those injured to sue at-fault drivers for bodily injury, and pays unlimited medical benefits through catastrophic claims coverage (the next highest is New York, which limits payments to $50,000).

When adjusted for price and medical care, the CRC said the average auto injury claim in Michigan should be $12,885; instead, it is $20,229.

Because of the state mandate for coverage, as well as the fact that auto insurers are unable to negotiate the rates they are charged, incentives are distorted across the insurance system. CRC found that the claims from Michigan health providers are 24 percent higher than in other states, which inevitably leads to insurance companies paying more and passing the higher price on to consumers.

And people making claims from the Michigan Catastrophic Claims Association more than doubled from 2002-2012, meaning insurance rates increase to pay those claims. Rates are expected to skyrocket in the coming years.

For every medical category, CRC found that compared to other state health reimbursement programs, the medical costs associated with no-fault coverage were higher. That is, health providers were charging much more for the same care.

The report covers a lot of areas and is fairly complex. But the reason for high costs is clear: Since coverage is mandatory and insurers cannot negotiate on price, incentives for consumers shopping for insurance and medical providers requesting pay are distorted.

Michigan legislators should work to properly align the costs and benefits of the insurance market.