Hospitals: Careful What You Wish for on Medicaid 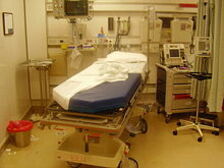 Avik Roy reports in Forbes that a new study by the Lewin Group, a health care consulting firm, suggests the Obamacare Medicaid expansion may cost hospitals hundreds of millions of dollars in losses due to greater-than-expected "crowd-out" effects.

This is when individuals drop or lose higher-quality private health insurance because of the availability of "free" taxpayer funded coverage, specifically, lower-quality Medicaid.

Because Medicaid reimbursement levels for medical services are so much lower than private insurance reimbursements, providers lose when a greater proportion of their patients are on Medicaid rather than having private coverage (including subsidized coverage that will be available to many through the Obamacare exchange).

Lewin only examined one state, New Hampshire, so the findings don't necessarily apply to Michigan, but they should nevertheless give pause to hospitals here who have been lobbying mightily in favor of the Medicaid expansion.

Roy describes the arithmetic: Adopting the expansion would mean 22,300 fewer uninsured people, but in the process 32,120 people would lose higher quality private coverage and be forced to make do with lower quality Medicaid. He concludes:

Every state is different. But it would be interesting to see the Lewin study replicated in other states, like Michigan and Ohio, that remain undecided about the Medicaid expansion. Hospital lobbyists keep clamoring for more government subsidies. But it's far from clear whether they're doing their clients a favor. And if you're a taxpayer, or a low-income American who has worked hard to gain private coverage, you just might fare even worse.

The Michigan Senate on Tuesday passed a Medicaid expansion bill that is headed back to the House for a vote, which could take place this coming Tuesday. Gov. Rick Snyder has lobbied extensively for Medicaid expansion, which is a key component of implementing Obamacare.