Escaping the Scandal in Rose City 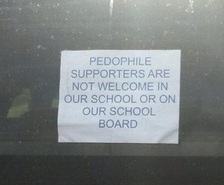 A sign posted by a Rose City resident. Photo by Kelly Hunt.

Parents at Rose City Middle School are outraged at the behavior of a school board member and several teachers.

Neal Erickson, a former teacher at the middle school in Ogemaw County, was convicted of having sex with an eighth grade student. Though he is in custody, parents are upset that a school board member and six teachers have publicly supported Erickson.

According to the Ogemaw County Herald, West Branch-Rose City school board member Mike Egan sat with Erickson's family in court during sentencing, and the six teachers wrote letters to the judge requesting leniency.

In their letters, some teachers blamed the victim for not reporting the abuse.

"The ongoing friendship that the pair had beyond the years of reported sexual activity between them and the fact that the victim did not file the complaint is strong indication that the victim was consenting," wrote one teacher.

Understandably, some parents are very upset. During Erickson's sentencing, according to the Herald, Judge Michael Baumgartner called the teachers' support a "jab in the eye with a sharp stick to every parent who trusts a teacher."

A Facebook group of more than 2,000 Rose City residents, parents and community members has sprung up, with parents organizing around the victim's family. In the group, parents have stated that they will refuse to have their children in a classroom with the teachers who wrote letters of support for Erickson, who was sentenced to 15-30 years for criminal sexual conduct.

Parents have asked that the teachers be disciplined or fired, and that the board member resign. In response, school officials have noted that the district could face expensive litigation if the teachers challenge their termination.

As Michigan Capitol Confidential has reported in the past, tenure rules have protected teachers convicted of murder, soliciting prostitution and found to be using drugs on the job.

Since the Rose City teachers and school board member who supported Erickson  still are with the district, parents are considering their alternatives.

Unfortunately, there are few physical public school options for Rose City parents who want to leave their district. The West Branch-Rose City school district lies in northeast Michigan, about 75 miles north of Saginaw. Though neighboring districts offer Schools of Choice, driving a student to the nearest middle school in another district would take more than 30 minutes, no small commute.

Some parents have posted about homeschooling their children, or setting up a homeschool co-op. Others have recommended online virtual schools as an alternative. One parent, Melissa Friday, recommended Michigan Virtual Charter Academy, saying that teachers "are available 24/7 for students," and that the school has been "wonderful."

The travesty at Rose City illustrates just how important it is that Michigan allows virtual schools, Schools of Choice and homeschooling. In another state with less choice, parents would have no other option but to send their children to a classroom taught by an individual whose actions they find abhorrent.