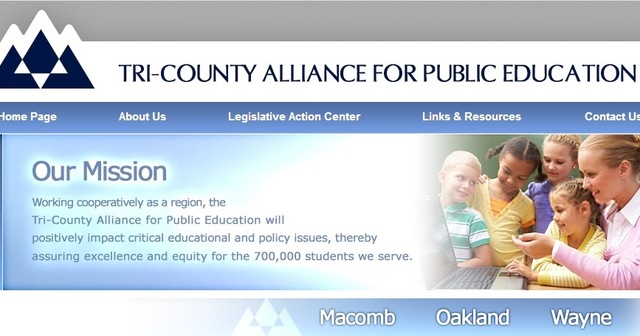 Oakland Schools and the Tri-County Alliance

Right off the bat, the Tri-County Alliance was mistakenly referred to as a "parent association."* As reported in Michigan Capitol Confidential last month, there is no mention of parents or evidence of parental involvement with the TCA, according to documents obtained in a Freedom of Information Act request.

Instead, the documents show that the group is funded by the school districts in Wayne, Oakland and Macomb counties, overseen by former superintendents and largely exists to lobby legislators for more money for school districts and less educational freedom for parents. The schools pay for the group to lobby but do not report lobbying expenses on their district websites.

Nobody should be under the illusion that Markavitch and Burton are just two people who happen to share the same interest in the status quo to try and improve public education. Oakland Schools hosts the TCA in its building, covering most of its operating costs. Before taking the executive director job at the TCA a few months ago, Burton worked for the Democratic Senate Minority Leader. He ran his own lobbying group (which had provided services to the TCA) based in the Lansing area. Documents suggest the TCA is scheduled to be moved to Burton's offices.

There were other questionable claims made in the interview:

The 26-minute interview does include some good discussion on what an "adequate education" means and opinions on issues like testing. The necessity of ensuring that teachers pay for some of their health care is even acknowledged (before recent reforms, teachers paid an average of 4 percent of their own health care premiums and more than 300 plans statewide required them to pay nothing). Overall, the participants made some good points about Lansing micro-managing local schools.

But the best way to solve these problems would be to allow parents to choose which schools are the best fit for their children and to let this competition drive excellence.

Disappointingly, Burton and Markavitch advocate for the state to limit where parents can send their children to be educated and for taxpayers to simply continue sending them more and more money with no say in how the funding is spent.

School districts are made up of people, and people respond to incentives. In that way, parents taking their children out of one school and going to another is a good thing — but don't expect those in the district they left to be happy about it.

*Editor's Note: Fahle and Markavitch clarified that the group was inadvertently identified as a "parent" group and this was later corrected during the program.