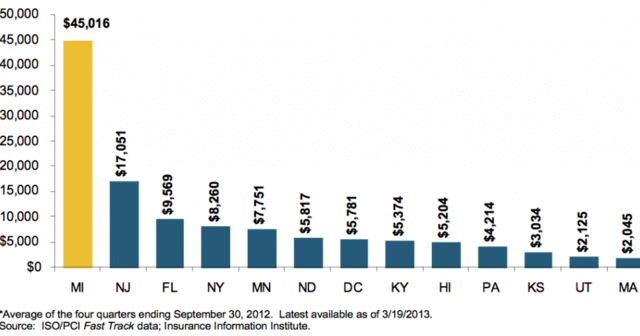 Michigan is unique among states in that it has both no-fault insurance and unlimited personal injury protection for automobile drivers. That results in car insurance rates among the highest in the nation.

However, that may soon change.

Gov. Rick Snyder has unveiled a proposal to reform the law. According to the Detroit Free Press, the plan would cap benefits from the state accident fund at $1 million and could save the average family $250 per year. Under the current law, insurers are reimbursed for all costs above $500,000 from the Michigan Catastrophic Claims Association (MCCA), which is supported by an annual fee of $175 (soon to be $183) from drivers. The change would still leave Michigan with the nation's most generous auto medical coverage.

No other state guarantees unlimited, lifetime benefits. As a result of the mandate, the Insurance Industry Institute reports that the average cost per no-fault claim is $45,016 — more than twice that of the second most expensive state, New Jersey. The average claim in Michigan has tripled since the year 2000.

The reason is a lack of incentives. Unlike private insurance companies and other government programs, there are limited cost controls on the amount medical providers can charge for care when it comes to injuries sustained in automobile accidents.

According to the state's catastrophic claims association, the comparative average hospital billings for the same procedures are much higher for the patients receiving no-fault coverage than those on Medicare or workers' compensation. For example, the average cost of an MRI is $484 for someone on Medicare; $766 for a person on workers' compensation; and $3,279 for an individual with no-fault coverage.

The main worry about reforming the system is for the small number of people needing lifetime medical care costing more than the state cap of $1 million. Everyone should be allowed to buy insurance guaranteeing unlimited medical care if they so choose, but if they do not, the governor's proposal would shift many of those to Medicaid. At the same time, a review of bankruptcy filings by state shows no correlation between a higher auto insurance cap and a lower rate of financial failings or lower mandated coverage resulting in a higher rate.

Catastrophic car accidents are horrible and the issue of insurance is touchy because it involves people who experience life-altering circumstances. But there is no free lunch in life or public policy and the state should strive to consider the effects on all people. And one major problem with the current system is the cost to low-income residents.

There are plenty of ideas for how to reform Michigan's auto insurance industry. Gary Wolfram, a Mackinac Center adjunct scholar, and D. Joseph Olson, a board member, authored a study a few years ago on the problems and some proposed solutions. In it, they summarized a main issue:

Consumers are not allowed to choose a policy that fits their risk preferences, and are forced to buy more expensive insurance than they would choose. This is a particular problem for low-income residents, who when faced with high insurance premiums may choose to evade the law and not purchase insurance. The fact that Michigan ranks so high in its number of uninsured drivers can be explained in good part by the inability of drivers to choose less expensive policies.

The result of the current system has been the high cost of Michigan automobile insurance. This can be better solved by more closely aligning the incentives of those buying car insurance, the insurance companies providing it, and the medical providers caring for those who get in accidents.