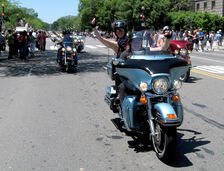 Last spring, Michigan eliminated its helmet requirement for motorcycle riders who had additional insurance coverage and met other conditions.

Six months after the bill went into effect, MLive ran an investigative series claiming to show the "regrettable impact of the change."

The series focused on one main point: Motorcyclists who chose not to wear a helmet were more likely to die or be seriously injured in their crashes. This is true, but the analysis is lacking in other areas and the insinuation that allowing people to not wear helmets is more dangerous is not supported by the data.

First, MLive discounts something important: That people who choose not to wear helmets are more reckless in general, and thus more likely to get in crashes as well as experience severe injury or death. That is, the report assumes every rider is exactly the same.

But that’s not the case. As reporter John Barnes notes, for crashes, “Helmetless operators were at fault 51 percent of the time, compared to 42 percent for those with helmets. They also were more likely to have been drinking, one in seven compared to one in 17 with helmets.”

MLive ignores the evidence that helmetless riders are significantly more likely to get in accidents in the first place — whether wearing a helmet or not.

Allowing riders the choice in protection separated them into categories of "riders with helmets" and "riders without helmets," whereas before they were all together, which skews the data for both groups. This oversight happens in many reports discussing motorcycle accidents and deaths and is almost always enough to throw out the rest of the analysis.

Second, it has been maintained that riding without a helmet can allow riders to avoid some accidents since the helmet can restrict vision. This is backed up by the data MLive presents. MLive notes that, "There were more than 3,000 motorcycle crashes (both with and without helmets) in Michigan since the state's helmet requirement was repealed in April. At least 700 of these involved riders or passengers without helmets." Around the country, 66 percent of motorcycle riders wear helmets, and the number is lower in states giving riders the choice.

So while it is too early in Michigan to know the percentage of riders who choose not to wear a helmet, these numbers suggest that they are less likely to get into accidents. And that’s even with those riders being more prone to accidents in the first place.

The analysis also is incomplete.

For example, it may be true that not wearing a helmet means someone involved in an accident is more prone to death. But what are the coma or other severe injury rates of riders with and without helmets? Perhaps there is a trade-off in the types of injuries or death suffered.

The comparison also ignores the increased number of people registering to ride motorcycles compared to past years. One of the researchers hired by MLive concluded that his years of study convinced him that "helmet use does not reduce fatalities." This is not expanded upon or mentioned again. In the meantime, motorcycle fatalities and injuries have been stagnant or trending downward, despite no real trend in helmet usage; this is never mentioned or discussed.

The last point the analysis misses is what is known as the “Peltzman Effect.” The theory, popularized by University of Chicago economist Sam Peltzman, notes the “tendency of people to react to a safety regulation by increasing other risky behavior, offsetting some or all of the benefit of the regulation.” This suggests that riding without a helmet may mean cyclists driving more safely.

This “risk compensation” is well-documented and shows up in mandated seat belt use, bicyclist accidents from wearing helmets, moral hazard from bank and auto bailouts, flood deaths despite safer levees and many other instances in walks of life.

Riding a motorcycle is one of the most dangerous choices that someone can make: Riders are 5 to 14-times more likely to die than those riding in cars. But whether a rider chooses to wear a helmet or not should be left up to them; personal freedom only means something if people are able to do something other people don’t like. And it is only because of the pervasiveness of government into our lives that motorcycle safety affects other people at all.