In the past decade, Oklahoma jobs are up 3.8 percent while Michigan is down 13.8 percent 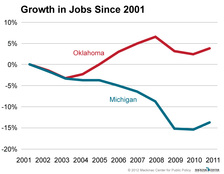 If Michigan were to become a right-to-work state, unions could no longer force members to financially support them. Around the country, many workers flee their union when given the choice. This means that our state’s largest union, the Michigan Education Association, could potentially lose a lot of members if teachers decide the group is not delivering services worth hundreds of dollars a year in dues.

Since they have so much at stake, the union is doing its best to get their members to contact elected officials and stop the discussion. But when putting together a “Right to Work Facts” page, the union is factually challenged.

On its website, the MEA has a page titled “How to voice your opposition to right-to-work legislation.” A lot of the site is amusing: For example, they say right-to-work is a “blatant power grab by CEOs” and that “Rich CEOs are making a power grab” to “exploit” and “weaken” because they are “greedy” — all interlaced with the “core message” that “We must work together, not tear one another apart.”

But under “Key Facts,” the union writes this:

Proponents of right-to-work would have you believe that middle-class families in states that have passed right-to-work laws would be better off. They’re not. For example, when a right-to-work law passed in Oklahoma, state legislators promised companies would relocate to the state because of it and there would be more jobs available. But 10 years later, jobs fell by 25 percent and the number of companies moving there dropped by 33 percent.

This is false. Despite two recessions, jobs in Oklahoma are up 3.8 percent since 2001 while Michigan, on the other hand, lost 13.8 percent of its jobs during the same time, according to the Bureau of Labor Statistics.

The MEA hasn't responded to requests to explain where they got their numbers.

An honest discussion about the benefits of a right-to-work law will require an honest representation of the facts.