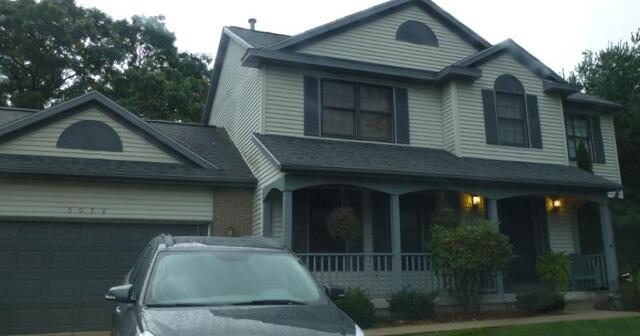 5076 Montauk Drive, in Alpine Township. The property was acquired by the Kent County Land Bank for $10,448.28. Photo by Rusty Richter.
Fiscal
Blog

The house sitting on 5076 Montauk Drive in Alpine Township (pictured at right) doesn't look like a blighted property. The house is not crumbling, nor does it appear to be in an area where vacancy is a concern.

However, when the Kent County Land Bank Authority acquired 5076 Montauk this summer, the property automatically became "blighted." Any property acquired by any Michigan land bank is considered blighted by law, regardless of the property's condition or location.

In Kent County, properties held by owners who repeatedly fail to pay property taxes are subject to tax foreclosure. Tax foreclosed properties are sold at a countywide auction to the highest bidder.

The theory behind land banks is that government needs a tool to deal with undesirable properties that fail to sell at tax auction. But 5076 Montauk does not fit that bill. The land bank appears to have acquired the Alpine Township house to help fund its operations — not because the property lacked interested buyers.

Land bank staff, as reported by MLive, wrote that 5076 Montauk is a "Nice Home," and that "Revenue from this project will go a long way to help fund the Land Bank."

The phrase "long way" seems accurate. The land bank was able to acquire the property before it went to auction for the amount of taxes due — $10,440.28.

Had the property gone to tax auction, it could have sold for more than 10 times that amount as interested bidders upped the price. The revenue from the sale of 5076 Montauk at auction would have gone to Kent County, which is looking at a $955,000 budget deficit.

However, the property was blocked from going to tax auction. The land bank requested that the county acquire more than 40 properties before tax auction and then transfer those properties directly to the land bank.

Michigan's land bank law specifies that properties must be offered at tax auction before being transferred to land bank ownership. County-land bank coordination circumvents this restriction.

It appears that land bank staff anticipate gaining nearly $100,000 from 5076 Montauk. And that's to say nothing of re-routed property tax revenue. Land banks receive half of the tax revenue from a property for five years after the property is sold.

Dan Kildee, congressional candidate and founder of the Center for Community for Progress, an organization that promotes land bank legislation in other states, has said that land banks get to be the "smartest and luckiest speculator."

But Michigan's land banking law ensures that land banks are the most well-connected and favored speculator. Land banks can acquire properties through intergovernmental coordination, refuse to sell those properties (or sell them to preferred organizations), take on debt and ensure their continual existence by redirecting tax revenue.

When blocking properties from going to tax auction, Michigan land banks are getting in the way of one of the best chances at redevelopment: private investment. Tax auctions are frequented by entrepreneurs, and individuals looking to get a good deal on a home. When those entrepreneurs do well, so does the area as properties are improved and occupied.

When land banks acquire properties like 5076 Montauk, they are stalling a sale and opening taxpayers up to the risks of owning vacant property. Though 5076 Montauk may seem like an easy deal, there is always the risk that a property won't sell. The cost of this risk accumulated over time is the slow and steady amassing of vacant property.

Instead of taking in sales revenue at tax auction, Kent County revenue is being redirected so that the land bank can attempt to play the odds. But in this case, taxpayers bear the risk instead of private individuals.

Michigan's land bank law is nearly a decade old. It's time to start asking if Michigan's land banks are actually stalling the spread of blight, and whether the acquisition of properties like 5076 Montauk is worth the risk to taxpayers.

For more information on this story, see Michigan Capitol Confidential.