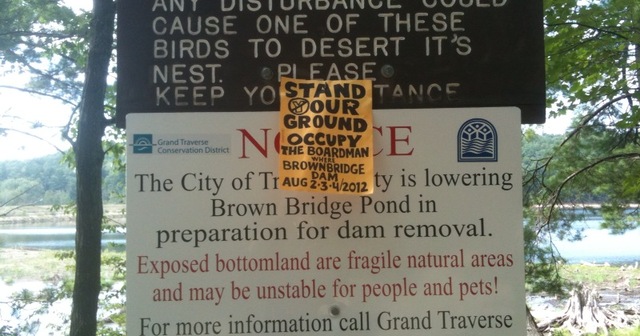 Tearing a page out of the Occupy Wall Street playbook, concerned Grand Traverse County residents are employing a similar strategy this weekend. The residents initiated “Occupy the Boardman” at the Brown Bridge Dam on Friday, Aug. 3, in order to raise awareness of the environmental and ecological damage initiated by the drawdown of impounded water between three of the Boardman River dams.

In addition, OTB is protesting the proposed removal of the dams, which they assert would release trapped toxic sediments from the impoundments into the Grand Traverse County watershed; further destroy property values of landowners who have owned homes on the impoundments for decades; potentially pose flood threats throughout the county and within Traverse City; eliminate any future possibility of once again generating renewable hydroelectric energy from the Boardman River; and violate the trust that established the 370-acre Grand Traverse Natural Education Reserve on the impoundments and the Brown Bridge Quiet Area, which were respectively dedicated in 1976 and 1977. Demolition of the dams will begin as early as this year if the Michigan Department of Environmental Quality issues the necessary permits.

The Boardman River’s dams were first built in the 19th century to control the flow of timber from the area’s logging operations. In 1894, the Grand Traverse County Board of Commissioners granted approval for the building of the Boardman River hydroelectric dam (also called the Keystone Dam) by the Boardman River Electric Light and Power Company. In 1921, the Brown Bridge Dam was constructed. The Sabin Dam was expanded and repaired in 1930.

Consumers Energy subsequently decommissioned two of the dams as economically unfeasible in 1969; removed the generators; and sold the remaining dam buildings to Grand Traverse County for $1. Traverse City Light & Power surrendered its Boardman Dam permit in 2006.

Removal of the dams was first advocated two months after the issuance of a three-year preliminary permit to Grand Traverse County and Traverse City for a feasibility study for repowering the three dams by the Federal Energy Regulatory Commission in February 2009. Two months after receiving the FERC permit, the county and city were revealed as members of the Implementation Team for The Boardman River Dams Project, a consortium of groups dedicated to removing the dams.

“This is the equivalent of the fox watching the henhouse,” said Ed Martel, a property rights regulatory consultant in Antrim County. “It’s clearly a conflict of interest to possess a FERC permit to explore all avenues for the future of the dams — including repowering the dams — when you’re also a member of a group that explicitly wants to destroy them. In fact, the county and city as well as members of Michigan’s DEQ that also has employees as members of the Implementation Team only wished to work toward one desired outcome that doesn’t include hydroelectric, respects individual homeowners’ property rights, and destroys vast acres of public parks and wetlands.”

Martel noted that FERC denied a competing permit from Arizona-based Peterson Machinery to study the feasibility of repowering the hydroelectric dams, and that the company was seeking to repeat the significant success of a similar project in Elk Rapids, Mich., at the privately owned and operated Elk Rapids Hydroelectric LLC.

“The land that was returned to nature in the 1970s, that was given to the public, to future generations of all children, is being cunningly stolen and destroyed,” said Maria Housden, an author who grew up in Grand Traverse County and is one of the dam-removal opponents attending the OTB. “I recently returned to Traverse City with my two youngest daughters and saw the devastating effect of the drawdown at Brown Bridge Dam.”

The OTB protest is scheduled to extend throughout the weekend, and coincides with the Traverse City Film Festival, which is organized by Michigan political firebrand Michael Moore and this year features an appearance by actress and political activist Susan Sarandon. OTB organizers hope to garner the attention of festival participants and attendees and persuade them to take up their cause.