In his book “New Ideas from Dead Economists,” economist Todd Buchholz quoted bank robber Willie Sutton to explain why so many businesses lobby government for special favors including tariffs, subsidies and monopoly privileges: “That’s where the money is,” Sutton once said when asked why he robbed banks.

In Michigan, the “bank” is the state Capitol in Lansing, and some of the favor-seekers have not only been spectacularly successful, but have preserved special privileges gained at the expense of their fellow citizens for literally decades, amassing fortunes in the process. 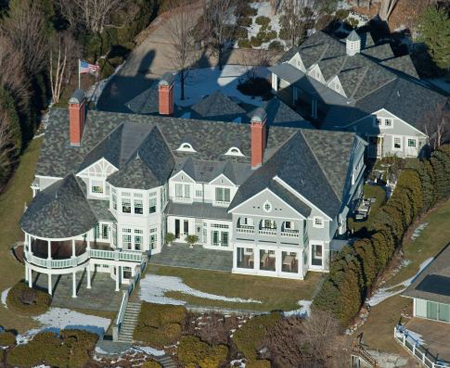 How large are those fortunes? The house (above) is one such owned by a lucky favor-seeker — a Michigan beer and wine wholesaler. Tax records indicate the house may have a market value in excess of $6.7 million. Who knows, maybe this palatial estate’s owner would have made his fortune even without having been granted exclusive regional beer and wine distribution territories. The favor-granting Lansing politicians sure did grease the skids, however, for this monopolist and a handful of other families whose own multi-million dollar mansions could just as easily provide this story’s cover photo.

It is worth noting that Mackinac Center analysts are not opposed to financial success or buying big houses. The issue here is not the house, but building wealth by extracting special, protective favors from the government.

Beer and wine wholesalers have enjoyed what economists call “monopoly profits” from a state law that actually mandates that most beer and wine makers grant wholesalers exclusive sales territories (monopoly areas) on their products. This almost assuredly results in higher prices for consumers, essentially imposing an invisible tax that goes not for schools, roads or police, but into the pockets of a fortunate few families. As economist Todd Buchholz once put it, “Politics can be a wonderful investment.”

It’s hard to estimate exactly how high a premium beer and wine consumers pay to keep these monopoly profits flowing, and how much lower prices would be if producers weren’t banned from using less costly distribution channels. One anecdotal example is suggestive of the magnitude.

A decade ago, Northwest Airlines was busted for shipping beer served on its airplanes in from Minnesota rather than buying it from the wholesaler whose monopoly turf apparently includes Detroit Metro Airport. Reports indicate that, even with the added transportation costs, bypassing the monopolist saved the airline $3 million annually. Multiply that times the countless other businesses (and Joe Six-Packs) who must also pay the monopoly premiums and the result is waterfront mansions like the one shown above.

Exclusive sales territories are not the only gift from lawmakers that keeps on giving to Michigan’s beer and wine wholesalers. A so-called “post and hold rule” facilitates price-fixing collusion by requiring wholesalers to post prices and then not change them for a certain length of time. One 2010 study estimated this practice alone increases retail prices by 6.4 to more than 30 percent, depending on the product.

State law also benefits beer and wine wholesalers by imposing population-based quotas on the number of stores where one can obtain a competing product — distilled spirits. Another rule prohibits liquor stores from being located within a half-mile of another. The beer and wine wholesale monopolists benefit because there are no similar limits on the number of retailers who can sell their products.

Last year Gov. Rick Snyder convened a commission to review Michigan’s alcohol control code and recommend changes. Current law amounts to a recipe for crony capitalism of the worst sort, transferring wealth from the many to a privileged few.

Should the Legislature take this up, it’s as sure as death and taxes that this fortunate handful will lobby hard and use every “protect public safety” ruse in the book to keep the monopoly profits flowing. The Legislature will have little incentive to make bold changes, and the people they represent will continue to pay the price.