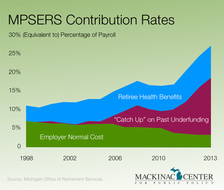 However, when the time came to stop talking and start voting, the Senate made a respectable down payment on desperately needed reforms. Referring to one major reform provision added late in the process, Senate Majority Leader Randy Richardville, R-Monroe, said to reporters, “Tell the Mackinac Center that, OK?”

Here are the major provisions of the bill that passed the Senate, 20 to 18 (Republican Senators Tom Casperson, Mike Green, Geoff Hansen, Rick Jones, Mike Nofs and Tori Rocca joined all 12 Democrats in voting “no”):

Thankfully, a late proposal from Gov. Rick Snyder to “prefund” those optional retiree health benefits was not adopted. This would have dinged taxpayers $500 million annually for an optional benefit that could be trimmed or eliminated at any time — and should be.

There’s a lot of blather being reported about the “transition costs” of closing the system to new employees. It’s all bunk. For one thing, the supposed “costs” have already been incurred — they’re the amount of past pension underfunding the state must “catch up” on. Closing the system changes the rules for reporting these costs, but as the author of a recent Arnold Foundation study explained, the rules “pertain only to financial reporting and not to legislative policy.”

In other words, the state is not required to accelerate the rate at which it amortizes these liabilities. Even if legislators want to turn this financial reporting into policy, the state has options to address this underfunding.

Despite these reforms, however, Michigan’s long school pension nightmare is not yet over. Some 150,000 current school employees are already enrolled in the defined-benefit system. The bill did nothing to address the causes of persistent underfunding of contributions intended to cover their future benefits, which means unfunded liabilities may still continue to grow for some time.

But this bill passing the Senate is still a big deal. If the House doesn’t sell out to the politically potent and distinctly unreformed state teacher unions, this will represent a significant contribution to a Michigan economic and fiscal turn-around that’s showing signs of being the real deal.