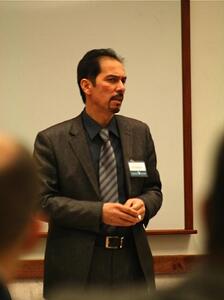 Professor Ramizpoor speaking about his work at the Mackinac Center for Public Policy.

Professor Abul Ahrar Ramizpoor was 9 years old when troops from the U.S.S.R. intervened in Afghanistan in 1979. He remembers standing with his family, feeding their small library of books one-by-one into a fire. They had heard stories of the Soviet communists murdering “intellectual” Afghan citizens and Ramizpoor’s father wanted to keep his family safe.

Ramizpoor and most of his family survived the 10-year Soviet occupation of his home country. Today he is married with two young children and works as a United Nations human rights officer. He has also started Afghanistan’s first free-market think tank promoting classical liberal values. A former lecturer at Kabul University, Ramizpoor runs the think tank voluntarily in order to educate his native country on the values of liberty, freedom and human rights. 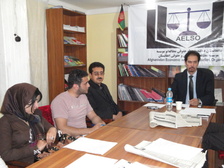 Professor Ramizpoor working with students and staff at the think-tank in Kabul, Afghanistan.

Ramizpoor visited the Mackinac Center for Public Policy this past week to learn more about how free-market think tanks work and to discuss his work with the Afghanistan Economic and Legal Studies Organization (AELSO), located in the capital city of Kabul. He sat down for an interview with Capitol Confidential while in Michigan. The following are excerpts from that interview.

How did you come to understand the values of liberty and freedom?

"I grew up in a family where my father was involved in reading a lot of books. He was educated on philosophy. He encouraged me to read Islamic jurisprudence as well as other philosophical thoughts and opinions. I followed that and studied at Kabul University on Islamic jurisprudence and law. I became familiar with the values of liberty, freedom and human life."

In 1979, the Soviet Union marched troops into Afghanistan. What was your experience with that?

"I remember the days when I was 9 years old in 1979 when the communist regime came into power. They killed many innocent people, especially intellectuals. My father had a small library which had many intellectual books from many different scholars, including human rights and libertarian values. We were afraid that the communists would become aware of this library and kill my father, so my father told me to help him burn these books. All of our family members worked together to put these books one-by-one in the fire."

What happened next in your life?

"During the communist regime in the 1980s, my father lost his job. I took the responsibility of my family. I studied in school and at the university while starting a small shop at home that made suitcases and luggage. I sold these in the local market.

"I graduated from university in the last year of the communist regime and then was appointed as a lecturer for Islamic Jurisprudence in the law department of Sharia Faculty of Kabul University. For 17 years I taught there.

"After the collapse of the Taliban regime in 2002, I started my work of introducing the values of a free society to the Afghan people, including women’s rights and children’s rights, with the support of a German free-market think tank.

"Later, I was involved with the Atlas Economic Research Foundation. They supported me to establish a think tank called the Afghanistan Economic and Legal Studies Organization to promote the values of a free society in Afghanistan."

Why are liberty and freedom important for Afghanistan?

"The Afghan people have suffered for more than three decades under dictatorship regimes. First the communists and then the religious dictatorships of the Taliban. I believe that tolerance, pluralism, the rule of law, respect for human rights and the market economy can bring values and prosperity to the Afghan nation.

"It will take time, but in practice, we have achieved a lot of these values [already]. Freedom of expression. Adopting of (sound) money laws. Protections of rights. [To some extent], each of these things has been achieved."

Is the message of freedom inconsistent with the Koran or the Muslim faith?

"We are looking strategically to present the libertarian values to the Afghan people coming to it from [the angle of] Islamic values. The modern interpretation of Sharia is open to freedom. Recently, we have not had any problems with fundamentalists or extreme Islamists. We do a lot of debates, roundtables and discussions.

"Some people feel these values are 'western values.' Fortunately, when they get a good explanation of these values, they appreciate it. But yes, some are against it from a religious point of view.

"[Of those against the message of freedom], there are two sorts of people: Those who have been affiliated with the communist party in the past and those under the influence of the extremist groups."

What obstacles have you overcome while doing your work?

"We are working to promote freedom, but we have enemies who are anti-freedom. They are also generating their own followers. Extremists, especially in neighboring countries. We should not stop our work. We will not be satisfied. We will continue working with other think tanks and individuals who promote freedom.

"In the past, as a well-known human rights defender, I have received many death threats by anti-government elements. But I did not stop my work and I will continue to work to provide liberty for my people.

"I have this message to those who want to tackle the extremists and the dictators: Have self-confidence. Continue working. Do not stop. We have work to do. We have to stand."

For more information on Professor Ramizpoor’s organization, or to make a donation for his cause, please see their website: www.aelso.org.