Motor City Finance: Then and Now 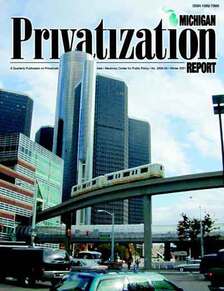 Ten years ago this month the Mackinac Center mailed a special, 28-page, full-color, Detroit-specific edition of Michigan Privatization Report to editors across Michigan. We had recently completed a comprehensive review of the city’s budget, and were deeply concerned by what it revealed.

To mark this anniversary, we’re going to post a series of blogs comparing Detroit’s fiscal status — then and now — and some of the privatization opportunities available to the Motor City.

Back in 2000, we noted that the city’s discretionary revenue for the year — the amount not already committed to particular uses like interest payments or retirement benefits — was a meager $71 million, down from $102 million the previous year. The decline raised red flags about the city’s ability to cope with sudden declines in tax revenue.

Detroit’s latest “Comprehensive Annual Financial Report” for the fiscal year ending June 30, 2010, contained an ominous warning from its auditors: “(T)he City has an accumulated unreserved undesignated deficit in the General Fund of $155.7 million as of June 30, 2010, which has contributed to the City’s dependence on borrowing for cash flow purposes.” In other words, the city’s financial position hasn’t just deteriorated since 1999, it’s actually turned negative.

Worse, these figures understate the magnitude of that deficit, because Detroit borrowed $249.8 million last year to cover its operations. This means it is possible that Detroit could soon experience “payless paydays” for employees or vendors, because it has little financial room to maneuver.

The solution to Detroit’s problems may involve the appointment of an emergency financial manager. Under current state law, however, this official lacks the authority to make the necessary changes. Absent a statutory change, it may be that only a federal bankruptcy judge would have the power to impose reform and give “haircuts” to the city’s biggest tax-eaters — unionized  public employees and retirees.

If the current statute is amended to bulk up this official’s power, imagine the improvements that could be instituted by someone with the talent and courage of current Detroit Public Schools Emergency Financial Manager Robert Bobb. Consider, for example, if Bobb had the power to set aside existing collective bargaining agreements with municipal employee unions, and trim the health benefits of retirees (who all qualify for Medicare at age 65 anyway). In addition, imagine the money that could be saved by privatization and other cost-cutting measures — the opportunities are almost without limit.