No Free Lunch for Failing Schools 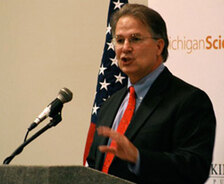 Thanks are due to Robert Bobb, the Emergency Financial Manager of Detroit Public Schools, and to others within and without the system for the good they have done in the past for the children of Detroit.

However, the latest request for additional state resources for DPS and other financially distressed school districts predicated on future "reforms" should be a non-starter.

The request reminds me of the old Popeye cartoon character, Wimpy, who famously promised: "I will gladly pay (reform) you Tuesday for a hamburger (money) today."

The request reminds me of the old Popeye cartoon character, Wimpy, who famously promised: "I will gladly pay (reform) you Tuesday for a hamburger (money) today."

Putting more resources into DPS, or any other failing district on the "promise" of reform, is pure fiscal folly and a waste of educational resources. DPS has been promising reform, to no avail, for at least two decades.

Instead, we need to promote the new 3 R's of education: Restructure, Reform and Reinvent. Then, and only then, might we consider adding a 4th R: New Resource Investment.

Any new money invested in our schools without restructuring, reform and reinvention is nothing short of providing a lubricant to protect the status quo. This will not get our children and our state to where we need to be and is the equivalent of pouring water into a glass with a hole in the bottom, then wondering why the glass never fills up.

Clearly there are islands of excellence, and many great teachers and support personnel work at DPS, but they continue to swim against the current in a sea of despair. They and our children deserve better.

In spite of recent good intentions, the system is bankrupt ? fiscally, morally and academically. What has been happening borders on educational genocide.

It is time to stop pouring money into a dysfunctional system and instead tear down and start over.

No rational person would replicate the existing Detroit Public Schools system, given the opportunity to begin anew. That opportunity exists today.

Let's re-imagine and rebuild DPS and other school districts across Michigan with the students and our collective futures in mind.

We have known for some time that the funding and spending practices for our schools in general, and DPS specifically, are unsustainable. Yet we continue to pretend and spend as if nothing has changed, when EVERYTHING has changed.

If building anew requires taking DPS and other school districts though legal bankruptcy, then let the process begin.

We are past the point where incremental changes to our schools are sufficient. Major fundamental change is required to get many schools out of not only financial distress, but out of educational bankruptcy as well. Real change requires real change!

Our leaders can continue to spend and pretend or take bold action that places teaching, learning and students ahead of adult power, control and politics.

Are we willing to take a bold leap for the kids and our state's future? Only time will tell.

Tom Watkins is an educational and business consultant in the United States and China. He served as Michigan’s state superintendent of schools from 2001 to 2005. He can be reached at tdwatkins@aol.com.