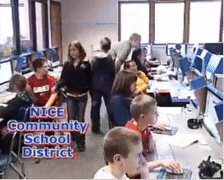 This photo is part of a new video advertisement that N.I.C.E. Community Schools is using to promote itself on its website, in area media, and on Facebook.

Editor's Note: This article follows the work that N.I.C.E. Community Schools has done as part of the state education department's "Project ReImagine" program. The first article in the series is available here.

The 1,200-student rural district has launched an online academy, been approved as an early middle college, taken a stand for universal preschool, and is converting to a technology-heavy, project-based learning approach in its high school.

Those are four of 11 initiatives that N.I.C.E. promised to implement when it was selected for Michigan's Project ReImagine program last year. The idea was that the state would select a handful of public school districts with promising ideas, clear away red tape on their behalf, give them a bit of seed money and advice, and then await beneficial outcomes that could be transferred to Michigan's other 700-plus public and public charter school districts.

It's a $3.4 million vision that takes apart the K-12, age-segregated, classroom-based program and changes it to a model that starts in preschool, takes place both in person and online, isn't tied to any particular bricks and mortar, and doesn't end until college or employment. It's also designed to make school more interesting.

"It's a student-centric paradigm rather than a seat-time paradigm," Haynes said.

VIRTUAL LEARNING IN AND OUT OF SCHOOL

One major component of the N.I.C.E. plan is Patriot Academy, a virtual school opening this fall that over time will allow students - including home-schoolers, students enrolled in other districts and, eventually, adults - to take coursework independently online. Ultimately, the entire high school curriculum could be completed online, plus postsecondary courses through Bay de Noc Community College.

The Academy will produce some of the courses itself, but also will purchase core curriculum from a vendor and may collaborate with other school districts to provide class material as well, Haynes explained.

He expects the academy will appeal to students who want to take classes that N.I.C.E. doesn't offer locally; those juggling high school with internships, apprenticeships or college courses; and those who just prefer online to face-to-face instruction.

The district already has secured a seat-time waiver from the Michigan Department of Education, allowing sixth graders through seniors to complete up to 100 percent of their coursework online, according to Haynes.

Even in more traditional classrooms, the district is moving toward a project-based learning approach that is heavy on computer learning. Modeled after the New Tech Network of schools, this approach puts students to work on projects that match their interests and their location, according to information at the New Tech website. The students are expected to work in teams to acquire the knowledge and skills they need to complete each project.

N.I.C.E. sent a team of educators to a New Tech conference this summer, and teachers will begin designing projects over the summer to implement in the freshman class this fall, Haynes said. The goal is to turn students into self-learners, with teachers as guides and coaches.

"I credit the teachers who are embracing this," he said. "Everybody agrees it's the right thing to do."

It's also the most expensive component of the N.I.C.E. proposal, at $2.6 million over three years, a great deal of it for educator training and professional development. The district intends to use about $1.8 million in its own local, state and federal funds toward project-based learning, which includes a $200,000 federal grant it received along with several other intermediate districts. Still, N.I.C.E. would need $777,000 from other sources for full implementation, according to its proposal.

Work also is well under way to launch N.I.C.E. Start, a preschool for 3- and 4-year olds on the school campus, and also to work with existing home- and community-based preschools on kindergarten readiness. The idea is to share ideas on curriculum and readiness activities among all the preschools, as well as offering training for area preschool employees.

"We don't have the space or the resources to educate every 3- and 4-year-old," Haynes said. "Why not work together?"

The district recently received a $100,000 grant from the Early Childhood Investment Corporation, a public, nonprofit corporation, toward its early childhood efforts. That grant represents some of the state's contribution to N.I.C.E. as a Project ReImagine district.

If the state doesn't choose to expand education funding to include universal preschool — a scenario that Haynes agreed currently is unlikely — then it should consider letting K-12 districts use existing funding for preschool programs, Haynes said. In other words, the state could pilot a program to provide 13 years of funding per student, as it does now, but the district could begin using that money when the child is in preschool.

"If you simply allow us to receive that funding at age 3 or 4 ... we believe the results would be more students pursuing postsecondary goals by twelfth grade, or simply graduating early," Haynes said.

Haynes said that he believes that the early learning gains, followed by letting students move through the rest of the curriculum at their own pace, would allow most students to finish high school early.

At the other end of the spectrum, the district wants to deliberately blur the demarcation between high school and college, and between school and work.

It already has become the only K-12 district to host an "early middle college," meaning students can enroll in a program allowing them to earn college credit - up to an associate degree in business, marketing/small business, or automotive technology from Bay de Noc Community College - while still in high school. Students can take an optional 13th year of school to complete the work.

Along those lines, the district and Finlandia College now have an agreement that students who successfully complete Algebra 3/Trigonometry at the high school will receive four math credits at the college. This is not the same as dual enrollment — in which high schoolers enroll in college courses. Instead, this grants college credit for a high school math class taught by a high school teacher.

The district is also arranging apprenticeship programs with local businesses and will offer students a chance to earn certification in specific industrial programs — such as Adobe's Solidworks computer-aided design program. Like project-based learning, these real-world classes are seen as ways to keep students engaged, Haynes said.

One business already working with the district is Pioneer Surgical Technology, a Marquette-based firm that designs and manufactures spinal and orthopaedic implants and instruments for health care applications.

"A lot of kids really don't know what they want to do when they get out of high school. Exposing students to real-world situations here gives them some ideas," Chris Roose, Pioneer test lab manager, told Michigan Education Report. Roose also sits on the N.I.C.E. school board.

Though plans are still developing, Roose said the program may allow students to work not just on the design of medical devices, but on other aspects of running a business, such as plant operations or accounting. Students with experience in Solidworks would bring more value to companies like Pioneer that use the software program onsite, he said.

In all, to fully implement every N.I.C.E. initiative would cost $3.436 million over three years, according to the budget it submitted to the state. By 2013, the changes would become self-supporting, the proposal says. Of the start-up costs, the district would cover about $2.34 million from local resources, leaving about $1.15 million for which there is no current funding.

It's possible that N.I.C.E. still will receive funding through the Race to the Top federal grant program. Even though Michigan was not selected to receive those funds in the first-round competition, it has submitted an application for the second round.

Haynes has consistently said that N.I.C.E. will implement as much of the reform plan as it can, with or without "Race" funding, but that the added money would speed up the process.

"We're proceeding regardless. The speed will be determined by the resources."