Japanese American School would immerse students in both worlds 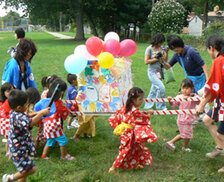 Students and parents participate in a summer festival at the Himawari Preschool summer camp in Livonia. The children and some adults are wearing “Happi” coats featuring Japanese characters that stand for “festival,” as well as summer kimonos called yukata.

Ted Delphia has worked as a school teacher, a school business manager and in information technology, but he's using sales skills to accomplish his next goal: opening a public charter school for Japanese and American students in southeast Michigan. 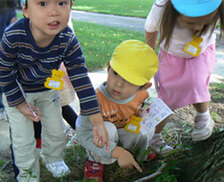 Students take a nature walk in the neighborhood surrounding the Himawari Preschool, searching for and identifying signs of fall.
More images …

Add a 200-day school year and an academic program that meets the standards of both countries, and Delphia believes the result will be the kind of global citizens that Michigan says it needs.

"Our American children need every opportunity possible to gain an understanding into other parts of the world," Delphia said in an interview at the Japanese-American preschool he now runs with his wife, Mitsuyo Delphia.

Like a number of individuals and organizations that would like to open public charter schools in Michigan, the Delphias face significant challenges. Not only would they have to acquire a charter giving them permission to open as a publicly funded school, but they would have to convince both Japanese and American parents that the Japanese American School of Southeast Michigan is a good investment in their children's future.

Southeast Michigan has long been home to a large contingent of Japanese families who are here temporarily because of the father's work, according to Delphia. Many of those families have elementary-age children whose parents are keenly interested in education during the three to five years they spend in Michigan.

The Japanese parents want their children to learn the English language — considered an asset in applying to Japan's highly competitive high schools and colleges — but also want them to keep up academically across all subjects with their peers back home, Delphia said. That's why they send them to the local public school during the week, but also to private "Japanese school" on Saturdays.

"The difference between these children and other immigrant children is that they aren't immigrants," he said. "These are global citizens, and the American system of education doesn't meet that need."

A charter school could do both in one setting — but what's in it for American students?

Delphia acknowledges that that will be the harder argument to make, but he's prepared.

The school has already received a planning grant, which it used in part to consult with an academic advisory team that "crosswalked" the Japanese and American elementary curricula and advised the school on making sure the standards of each are met, Delphia said.

One of the advisory team members is Dr. Hitomi Oketani-Lobbezoo, a professor in the Department of World Languages at Eastern Michigan University. She and the other advisers recommended that the school adopt a 70-30 Japanese-English approach, meaning 70 percent of the day would be spent with instruction and activities carried out in Japanese. This advice assumes that there are nearly equal numbers of Japanese and American children in each classroom.

The team found about 98 percent overlap between the kindergarten curricula in the United States and Japan, meaning the question is not so much what subject matter to present, but how best to present it.

The Japanese American School would be an example of "additive bilingualism," in which a child continues to learn and improve in his or her native language while adding a second language.

As the children mingle at school, they also will gain cultural understanding that will serve the American students well in the future, Delphia said. Overseas field trips are part of the long-range plan.

A global citizen himself, Delphia lived and attended schools in France and England as a child when the family accompanied his father on overseas assignments for Chrysler Corp.

As an adult, he joined the Japan Exchange Teacher Programme and worked as a teaching assistant at the junior high level in Moriyama City in Japan from 1995 to 1998. He then taught for two years at Our Lady of the Lakes High School in Waterford and next for a year at the International Academy of Bloomfield Hills.

He and his wife, who previously taught kindergarten in Japan, now operate the Himawari Preschool in Livonia, renting space in a former elementary school. About 90 percent of the 3- to 5-year-old students who attend the private preschool are Japanese students in the country temporarily, 6 percent come from blended Japanese-American families and 4 percent are American.

Delphia anticipates another question: Why Japanese instead of Chinese, a language that some Detroit metro districts have recently added to their curriculum?

It's true that many people think of China as the land of business opportunity, but Japan still has "a huge, undeveloped market," Delphia responded. The country's demographics — specifically an aging population — means that it will need to hire young talent from abroad at some point, and speaking their language "puts you in the driver's seat."

"This is beyond tax breaks," he said. "This speaks to what they (transnational workers) need."

Delphia wants to start small; the Japanese American School would open to about 50 kindergarteners in two classrooms in its first year, then expand gradually until it became a K-6 operation. By fifth and sixth grade, he envisions field trips to Japan.

Aside from convincing families to enroll, Delphia anticipates other challenges: Bilingual teachers are scarce and there is a cap on the number of university-sponsored charter schools in Michigan. He's already applied twice to Central Michigan University for a charter, but was turned down each time because the field of applicants was so large and the number of available charters so low.

The development team now is working with Livonia Public Schools on securing a charter and opening the school within that district. Aside from university-sponsored charters, state law allows individual conventional school districts and intermediate school districts to charter schools within their own boundaries.

"We are in the discussion stage. We're still ironing out the details," Livonia Superintendent Randy Liepa told Michigan Education Report. "They're starting very slowly, which is attractive to us."

The Delphias already rent space from the Livonia district for their preschool, and have been "great tenants," Liepa said. Since the Japanese American School likely would attract students from throughout metro Detroit, it represents a way to offer a new academic program without significantly impacting enrollment in any single other district, he pointed out.

Delphia said his plan matches what lawmakers had in mind when they wrote the state's original charter school plan: small, start-up schools that are heavy on innovation.

"Ours is a new idea," he said. "Our program is almost a poster child for what they (lawmakers) wrote in 1993."