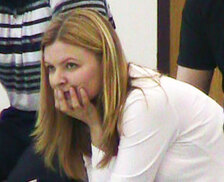 Carmen Foster, an emergency room physician, waits to see if her son’s name will be drawn in the lottery at South Arbor Academy.

The metal bleachers in the middle of the school gymnasium fill slowly with expectant  parents and playful youngsters.

All of the adults are here on this warm spring afternoon for the same reason: to find out if their children will gain admission to South Arbor Academy, a Washtenaw County public charter school that has become so popular that it conducts a public lottery each spring to divvy up any openings in its K-8 program.

Kindergarten is the most sought-after spot. The school has 77 seats available for the fall of 2010, but about 51 of those will be taken by siblings of students who already are enrolled at the school. That leaves only 26 seats to be filled by lottery, out of 206 applications. 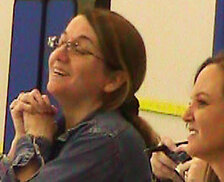 After nearly two hours of waiting, Michele Buchanan learned her twin sons were chosen by lottery to enroll in kindergarten this fall at South Arbor Academy.

Carmen Foster, an emergency room physician with the St. Joseph Mercy Health System, is one of the applicants.

"We looked at a number of schools. By far this was number one," said Foster, citing the school's academic track record and character education program. A native of Romania, Foster said that as a youngster herself, "We had a very vigorous education, which I definitely want for my children."

School Principal Tim DiLaura has heard similar comments in the past.

Beyond academics — South Arbor ranked seventh in the state and third among public charter schools on the latest Michigan Educational Assessment Program tests — he said the school culture and a focus on meeting student needs are attractive to parents.

"We have a physically and emotionally safe learning environment," he told Michigan Education Report.

Spring lotteries take place at public charter schools across Michigan every year. By law, any time a charter school has more applications than seats available, it must conduct a lottery to fill the seats. Siblings of currently enrolled students are given preference.

"We have parents here who have been on our wait list for three or four years," DiLaura said. This year, South Arbor had no openings in any classes except kindergarten, but had a total of 368 applicants for non-kindergarten spots. All of those names go on waiting lists.

While siblings are given preference, employees are not — a fact that weighed heavily on Michele Buchanan as she applied to enroll her 5-year-old twin sons in kindergarten.

Buchanan is an occupational therapist for National Heritage Academies, the educational service provider that operates South Arbor and 61 other public charter schools in six states. She has been with the company for 10 years and currently works in four schools.

Buchanan applied to enroll her sons in each of five NHA schools in southeast Michigan, hoping to win a spot in one of them. But her sons were wait-listed at every academy until the South Arbor event, when their names were chosen at random for kindergarten seats. (If one twin's name is chosen, the other automatically wins a seat.)

"After four waiting lists, I wasn't sure it would happen," a beaming Buchanan said outside the South Arbor gymnasium after the event.

The two-hour lottery followed a strict protocol, including a rule that it be videotaped. As the camera filmed, the names of all applicants in a given grade were placed in a container and drawn at random by an independent third party. As they were drawn, each name was read aloud and recorded, in order, on one of a series of white posters lining the gymnasium wall. Waiting lists are maintained even in grades with no current openings, in case a seat becomes available during the year.

DiLaura and admissions representative Laura Holliday both try to encourage parents whose children are placed on the waiting list, noting that movement up the list can be faster than anticipated.

"In this town, there's a fair amount of mobility," DiLaura said. That's one reason openings crop up. Another is that, in cases when only some of the children in a given family win seats, sometimes the parents choose to enroll the family in a different school rather than divide up the siblings.

Still, a disappointed Alicia Elie left before the finish. Her son's name was not chosen for a kindergarten seat, and he ended up well down the waiting list.

"It was my number one choice," she said. "I actually don't know what we're going to do or where we'll go."