Employment Creation in Michigan Illustrates the Ineffectiveness of the State's Incentives

Yesterday, the Bureau of Labor Statistics released the most recent quarter of its Business Employment Dynamics statistics[*] showing the level of private-sector "job churn" in each state, which is the number of jobs that disappear and the number that are created. They show that from the third quarter of 2008 through the second quarter of 2009, 778,025 jobs were created in Michigan and 1,144,655 jobs disappeared. Among other things, the figures starkly illustrate just how ineffective the state's economic incentive programs are. 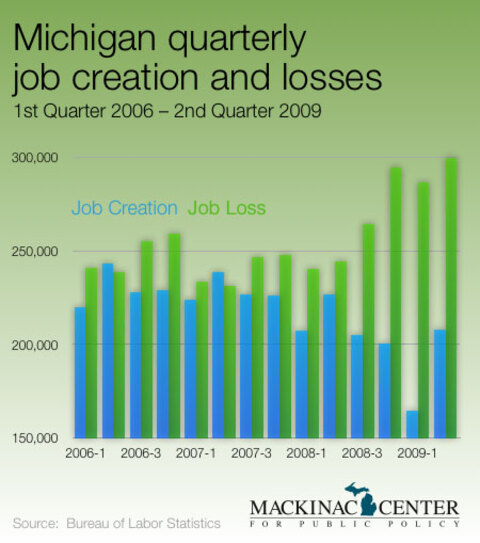 To put these figures in perspective, it's as if one out of every four private-sector jobs in the state today was added during the past year, and one out of every three jobs existing a year ago was lost.

Perhaps more than any other evidence, the job churn figures illustrate the complete futility of Michigan's and every other state's "economic development" programs. For example, the Michigan Economic Growth Authority is considered the state's "flagship" jobs program, yet projects involving MEGA assistance account for only 0.25 percent of the state's job creation over the program's history.

The state expects to spend $155 million luring movie producers to film in Michigan. In its first year of operations, even using the state's generous assumptions on its multiplier effects, the incentive accounted for just 0.1 percent of new jobs.

Even if these corporate welfare program job creation numbers are understated by a factor of 10, in the light of the the job churn that occurs each year, they still wouldn't have a candle-in-a-windstorm's chance of making a significant difference in the state's overall economic performance.

[*] The numbers are different from other figures we've used in the past, which rely on the Census Bureau's Statistics of U.S. Businesses series. The SUSB figures are published one year after the fact and cover a year-long period. Because companies can add and shed jobs throughout the year, a quarterly summation will increase the creation and loss counted between these surveys.