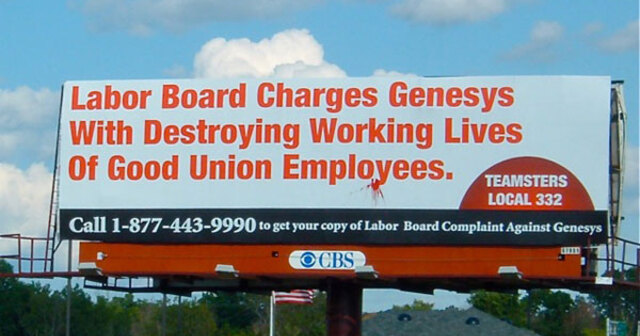 This photo shows the billboard Mr. Bollwitt references. It is located on I-75 in Flint near Genesys Hospital.

Union Interferes in the Provision of Health Care

I am a registered nurse at Genesys hospital near Flint, where the RNs and licensed practical nurses who do direct patient care are represented by the Teamsters. I believe the union-fostered attitude at our hospital works against teamwork. While Genesys is a great place to work, it would be even better if the union acted more professionally.

In a hospital, our job is to provide health care to patients or provide support for those who directly give care. But the Teamsters promote an attitude where many employees are not willing to do what they think is "someone else's job." Some nurses will not clean a room or bed so a new patient can be admitted, while others will not transport patients from room to room. They are capable and qualified to do these tasks, but they will not because "it's the housekeeper's job," or "the transporter's job." Occasionally nurses will choose to sit and wait, often doing nothing, delaying treatment for patients and increasing emergency room waiting time.

Our in-house nurse supervisors are RNs and have worked in direct patient care themselves prior to going into management. Some have pitched in during busy times and started intravenous lines or administered medications. They are licensed and qualified for these tasks. Patients and family members see this as professionalism and customer service. The union, however, sees this as a job threat and has filed grievances against supervisors, claiming they are doing the work of bargaining unit nurses. The union in effect says, "Your patients are not my problem."

The union also emphasizes seniority in job assignments, which again takes the emphasis away from patient care. This process can lead to "chain bumping" as nurses with more seniority can bump others out of jobs, which continues down the pecking order and takes nurses out of roles they know well and enjoy.

Unions can also make it difficult to institute needed changes in the workplace. A union will demand that its input and approval be obtained on any change that could even remotely be construed as affecting bargaining unit members. In short, the union finds some way of interfering with almost any change, which ties management's hands. It seems the union, rather than the administration, ends up running the organization.

Negative media publicity is a popular tactic used by unions like the Teamsters to attack employers while seeking public sympathy. The union at my hospital has gone to local news media and paid for at least one huge billboard to spread accusations against the hospital where I work (see image).

Labor unions can be beneficial when they act professionally, positively and responsibly on behalf of those they represent. Problems arise, however, when they act irresponsibly, stir up resentment and negativity, and interfere where they should not. In my experience, the Teamsters have done just that at Genesys.

These problems would arise less frequently in Michigan if we had a right-to-work law. Both employers and employees should understand that a right-to-work law does not prohibit the right of workers to join a union, nor does it mean unions cannot collectively bargain with employers. Workers can still unionize, but since they would no longer have to involuntarily support unions, the union leadership would have to become more accountable to members and employers, or risk membership decline, a reduced cash flow and diminished power. Greater accountability to their members will make unions less prone to bullying and more likely to be a positive influence in the workplace. This would make my unionized hospital a more pleasant place to work and could also draw more employers back to our state.

Mark Bollwitt is a registered nurse at Genesys Hospital, where he works in the emergency room. The Mackinac Center is a research and educational institute headquartered in Midland, Mich. Permission to reprint in whole or in part is hereby granted, provided that the author and the Center are properly cited.