Retirement fund losses will cost schools, but how much?

The retirement fund for public school employees reported $7.4 billion in investment losses in the fiscal year ending September 2008, a number that will begin working its way down to local school budgets beginning this fall.

Stock market declines left the Michigan Public School Employees’ Retirement System with about $39.8 billion in total net assets, down 19 percent from the previous year, according to its latest annual report.

Schools districts will begin making up that loss in October, through higher contributions to the retirement fund, but opinion varies on what will happen in subsequent years. Further stock market losses, combined with more retirees and fewer active workers, would exacerbate the problem, while an economic turnaround would mitigate 2008’s impact.

Birmingham Board of Education member Rob Lawrence said he believes the first scenario is already under way.

“I am extraordinarily worried,” Lawrence told Michigan Education Report, pointing out that the value of assets likely has declined further since the report was issued. “Since September 2008, not only have stock losses accelerated, but real estate value has declined.”

Even though MPSERS has a financial “smoothing” process that spreads out the impact of investment losses (or gains) over five years, Lawrence has predicted the cost to schools will rise significantly in the next few years.

But Phil Stoddard, director of the Office of Retirement Services, said the retirement system is designed to weather investment ups and down.

“What we should do it take each year as it comes. Speculation is just not valuable,” Stoddard told Michigan Education Report. The MPSERS system is designed to “smooth over the peaks and fill in the valleys” so that the school contribution rate remains relatively stable, he said.

Stoddard pointed out that the fund saw a similar decline in 2001 — a $5 billion investment loss, or about a 13 percent decline in total net assets, followed in later years by an upswing. School contributions rose and fell as a result.

Some say the time is ripe to change the school employee retirement system altogether and require workers to contribute more to their own retirement.

MPSERS is a defined-benefit program that promises its members health insurance coverage and a set monthly pension payment upon their retirement.

The money comes from school district contributions, investment income and, to a lesser extent, employee contributions. If the fund’s assets do not equal what it promises to pay, it is said to be “underfunded.”

As of September 2007, the pension fund was 88.7 percent funded and reported a gap of about $5 billion, in actuarial dollars, between amount needed and amount available, the MPSERS report said. But those numbers don’t yet take into account the $9.2 billion loss, Lawrence pointed out. A newsletter issued by the Office of Retirement Services in March put the funding level at 83.6 percent as of September 2008.

Schools currently contribute an amount equal to 16.54 percent of their payroll to cover both health and pension benefits. That will increase to 16.94 percent this October.  Dave Martell, executive director of the Michigan School Business Officials, said it could rise another 1 to 1.5 percentage points by the following year, “which would be a significant hit for schools.

“That’ll be the year we see the biggest hit on the fund,” he said.

Every percentage point increase in the school contribution rate costs the Saginaw Intermediate School District an extra $120,000, based on its $12 million payroll, according to Chris Frank, assistant director of finance and business.

“It obviously can have an impact,” Frank said.

“If I were predicting, I would say it will go up in small increments,” said Dr. Susan Meston, superintendent of the Muskegon Area Intermediate School District and a member of the state retirement board. “Obviously the rates in the future will be dependent on investments, how many people are contributing and how many people are drawing.”

Most employees also contribute to the pension fund to cover cost-of-living adjustments after their retirement. Their contributions generally fall between 4 and 6.4 percent, depending on wages and year of hire, but the rate does not fluctuate from year to year.

Though both are administered through MPSERS, school employee health and pension benefits have different legal status and are funded differently. Pension benefits are guaranteed by the state Constitution and are prefunded, meaning that today’s contributions are set aside and invested on behalf of tomorrow’s retirees. If investment returns don't match predictions, then school contributions make up the gap over time. 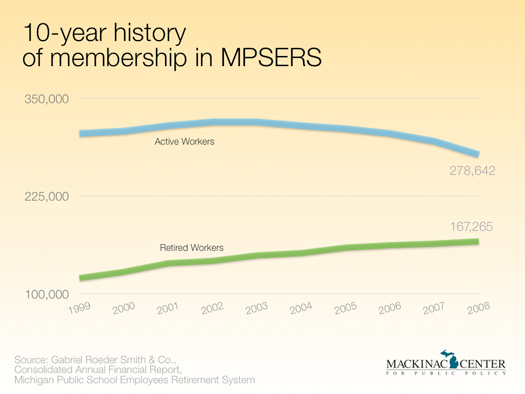 This graph shows the growing number of school system retirees in Michigan compared to the declining number of active employees.

Or, as a recent newsletter to retirees from the Office of Retirement Services puts it, “It should be reassuring that your pension is guaranteed regardless of how the financial market performs.”

Health benefits are promised, but various courts have ruled that they are not obligations in the same sense as pension benefits. (That could change, though, as this spring the House of Representatives adopted legislation that would give state employees, including school employees, a contractual right to retiree health care.)

The health plan is a “pay-as-you-go” system. Instead of setting aside money in advance, it uses each year’s school contributions to pay each year’s bills. At this point, according to the MPSERS report, the state has promised the equivalent of about $25 billion in health care to current and future school retirees.

The health fund is the larger worry in the long run, according to Martell and Craig Thiel, director of state affairs for the Citizens Research Council of Michigan.

“Health care is going to be the biggest (cost) driver,” Martell said. “As we see reductions in the number of employees and more retirees living longer … the concern is that the rate for schools could be high enough where everybody would say we can’t continue this any longer.”

“The lines are going the wrong way,” Lawrence agreed, referring to the growing number of retirees and shrinking number of active school employees. “There is no way to stay ahead of the curve.”

Michigan has taken some steps to address retiree health costs, Thiel said. Chief among them is a new “graded premium” in which employees with fewer years of service will have to pay more of their own insurance premium during retirement. That plan only applies to employees hired since mid-2008, though, so most savings won’t be seen for some time.

The state also has attempted to bring down retiree health costs through competitive bidding for insurance products, Meston said.

Martell pointed to use of co-pays, deductibles and drug formularies as evidence that, “The MPSERS board is doing a diligent job of trying to control costs.

“There is still a concern over the long term,” he said.

“More people are reaching retirement age and living longer in retirement,” said   Superintendent Scott Crosby, of the Wexford-Missaukee Intermediate School District.  “Those two factors are huge. I think that’s why it’s a key time for a potential change.”

Crosby told Michigan Education Report that he and fellow superintendents in his area have proposed that school employees at all levels begin contributing more to their retirement. Specifically, they have suggested changing state law to split any future increase in contribution rates between the school district and its employees.

“The cost of retirement needs to be shared,” Crosby said. “I’m an employee and I think that makes some level of sense.”

State Rep. Bill Rogers, R-Genoa Township, has introduced legislation that would change the retirement system from a defined-benefit to defined-contribution plan, meaning that school employees would pay more up front for their retirement benefits. The Mackinac Center for Public Policy, which publishes Michigan Education Report, has called for a similar switch.

Rogers’ plan would apply only to public school employees hired after July 1, 2010, and would hinge on using federal stimulus money to cover the initial costs.

“I’ve been stunned that this kind of liability (in the health fund) was basically ignored because it was off the books,” Rogers said, referring to a relatively new requirement that states put a dollar figure on estimated retirement benefit costs.

The state should keep the promises it has made to current employees and retirees, he said, but can’t afford to continue offering a defined-benefit plan to newcomers.

“That kind of game is no longer available. It just isn’t,” he said.