Defenders of Michigan's unreformed big government status quo like to cherry-pick measures of comparative state tax burdens that show this state to be "no worse than most."

Yet getting a valid indication of whether one state's overall tax burden is higher or lower than another is more complicated than most people imagine. Therefore, perhaps the best practice is to place a variety of such indexes side-by-side and let people judge for themselves. 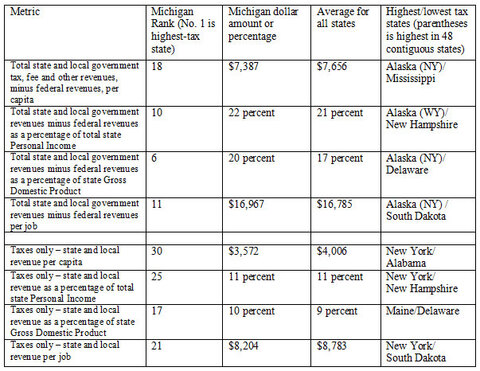 The various comparisons show that Michigan ranges from mediocre to bad. Not included are tax-like burdens imposed by other policies, such as Michigan's notoriously business-unfriendly environmental and labor regulations. Given those additional burdens, "We're no worse than the rest," is hardly a useful public policy prescription for a state that is much worse than the rest in the rate of its economic decline.

The first group of comparisons above using  "total government revenue" figures do not include federal money that is "passed through" state budgets, because that doesn't help assess a state's relative tax burden relative to other states. It's nevertheless interesting to see the comparisons when that federal money is included. Here are those figures:

Data was compiled from the U.S. Census Bureau and the U.S. Bureau of Economic Analysis. Alaska is unique in that a very large portion of its government revenue comes from gas and oil extraction royalty payments.

James M. Hohman is a fiscal policy research assistant and Jack McHugh is senior legislative analyst at the Mackinac Center for Public Policy, a research and educational institute headquartered in Midland, Mich. Permission to reprint in whole or in part is hereby granted, provided that the authors and the Center are properly cited.