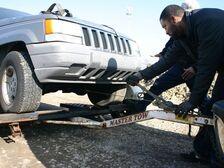 Photo courtesy of The Detroit News

The practice of civil asset forfeiture continues to be under scrutiny in Michigan, as three forfeiture victims filed a class-action federal lawsuit last month. The plaintiffs allege that law enforcement agencies either forfeited property without a hearing or have seized property for extended periods of time while not giving them an opportunity to get it back, violating their due process rights. Civil asset forfeiture allows law enforcement to seize and keep property without any criminal conviction. Jarrett Skorup, director of marketing and communications at the Mackinac Center, was extensively quoted by The Detroit News on the lawsuit.

“Normally, the Supreme Court has looked at these cases as violations of the Fourth Amendment (which covers probable cause and unreasonable search and seizure), and they’ve been upheld, but now they’ll look at it from a different perspective” Skorup explains. “The argument the court will now hear is that forfeitures constitute an unreasonable fine on people’s assets.”

For the past five years, the Mackinac Center has been conducting research on civil asset forfeiture in Michigan. A 2015 report it published identified many problems associated with forfeiture and offered policy recommendations. Since 2001, Michigan law enforcement agencies typically forfeited between $20 million and $25 million in assets yearly. In 2017, the state seized and kept about $13 million in assets. Last year, nearly 1,000 people had their assets transferred to the government without being charged or being found innocent of a crime. Though a significant amount of reform has been achieved, there is still more that should be done.

“Nobody should lose their property until they’ve been convicted beyond a reasonable doubt,” Skorup said. “Then, after the conviction, the court should decide if their assets were part of that criminal activity.”

Forfeiture Cases Can Take Years, Even for the Innocent; Supreme Court May Help