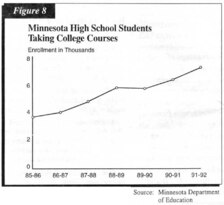 School enrollment is expected to surge, particularly in the western United States, increasing the demand for teachers. The U.S. Department of Education estimates that between 1990 and the year 2002, the number of teachers needed in all K-12 classrooms will increase by 19 percent, from 2.74 million to 3.25 million teachers.[78]

The cost of hiring these new teachers will be considerable. In 1991-92, the average public school teacher's salary excluding benefits was $35,487; adjusting for the fact that teachers do not work a full year yields a full-time comparable salary of roughly $46,000.[79]

Currently, districts that cannot afford to hire a full-time teacher for enrichment programs simply go without. With private-practice teachers, however, a district can hire a teacher on a short-term or part-time basis with minimal financial commitment, thereby providing students with exposure to a subject they might otherwise have missed altogether.

One way to meet the increased demand is to make use of a variety of private sector instructional firms. An advantage of contracting for instructional services is that private providers can be judged on outcomes, with firms being rewarded for successfully teaching students. This is in sharp contrast to the backwards incentive structures often found in public schools. As Principal Roger Harris of the Timilty Middle School in Boston, Mass., explains: "I don't see any incentive for improvement. In fact, as public school scores go up, they lose funding .... It's a Catch-22."[82]

Many school districts are finding it more cost-effective to contract out for various instructional programs rather than developing and maintaining the same capabilities in-house. Instruction may be contracted out to education companies, to other private schools or colleges, or to private-practice teachers who contract with schools for instruction. The following examples illustrate the variety of instructional services that are now contracted out by public schools.

Programs for students at-risk of failing or dropping out are now offered by private, for-profit firms. The Illinois-based Ombudsman Educational Services provides education programs for over 2,000 at-risk students in Arizona, Illinois, Minnesota, Florida, and Maryland. Middle and high school students are instructed by state-certified teachers with pupil-teacher ratios no greater than ten to one. The classrooms typically are located in commercial spaces, such as shopping centers or office buildings. Tuition at Ombudsman is $3,000 to $4,000 and is paid for by the school districts or on a private-tuition basis. That is well below the $5,000 to $8,000 that districts in those states spend on average to educate high-risk youths in the public schools. Moreover, Ombudsman boasts a retention rate of 85 percent of this hard-to-educate population. Says Boyle, "Anyone can teach good kids. It's the bad ones that make good teachers."[83]

The state of Minnesota allows some students failing to thrive in the public system to enroll in private, nonsectarian alternative schools at public expense. Part of the state's High School Graduation Incentives Program, the Private Alternative Program, allows students to enroll in private alternative schools on either a full-time or part-time basis. Approximately 20 private alternative schools take part in the Private Alternative Program, and in 1990-91 over 1,000 full-time-equivalent students participated.[84] In Wisconsin, the Milwaukee Public Schools offer a similar program for children at risk. In 1992-93, 1,035 Milwaukee students attended private, nonsectarian schools offering alternative programs.[85] Beginning in 1993-94, the Wisconsin legislature allows all districts within the state to contract with private providers for at-risk programs.

Another method of enhancing the educational opportunities of students is to offer post-secondary options as part of the regular high school program. Through this approach, high school students may attend some or all of their classes at colleges and universities using public funding.

Since 1985, Minnesota high school juniors and seniors have had the option of enrolling in and attending a public or private institution of higher education to undertake coursework counting toward high-school graduation. (See Figure 8) A student may opt to take courses at both the high school and college level; the school district is funded in proportion to the services it provides. Some school districts contract directly with the college or university to offer post-secondary coursework under the direction of a college advisor and a specially trained teacher on the high school campus itself.[86]

Among the over 80 participating universities are the University of Minnesota campuses, the Minnesota State University system, community colleges, and, notably, private schools such as the College of St. Thomas, a church-affiliated school. The program allows the participation of religious schools provided the students enroll only in nonsectarian courses.

Because Minnesota high schools must compete to attract students, they have improved their offerings, as well. Says Stephen Etheridge, Minnesota's education finance specialist for post-secondary options, "The plain reality is that it helps reform the high schools because if they don't offer what the students want, they'll go some place else."[87] Florida, Iowa, Colorado, Ohio, and Wisconsin also offer post-secondary options for public high school students.[88]

The learning needs of children are unique, and some children require extra assistance. Most schools already have special funds, under the federal Chapter 1 program, for example, for the purpose of providing additional instructional support. Such support can be provided by teachers employed by the school district full time, or through contracting with a private firm responsible for hiring, training, and assigning teachers.

Sylvan Learning Systems, a private tutoring company, signed a contract with Baltimore Public Schools in 1993 to provide remedial education to disadvantaged students in five elementary schools. Using $1.4 million in funding from the federal Chapter 1 program for low-income students, the Baltimore schools have retained Sylvan to provide instruction to 660 eligible students. Sylvan provides one-hour tutorials twice a week with maximum student-teacher ratios of three to one. Class sizes in the Baltimore schools for remedial instruction currently average between eight and ten to one, according to Sylvan. If a student fails to achieve significant increases in academic performance, the company will provide an extra six weeks of remedial education to the student at no charge to the schools.[90]

Contracting out for foreign language enables public schools to broaden their course offerings without having to increase the size of their permanent staff.

DiaLogos International Corporation, based in Raleigh, North Carolina, was among the first private businesses to provide foreign-language instruction in public schools. Beginning in 1981, DiaLogos supplied the foreign-language program, including instructors, to a magnet school in the Wake County School District. Another private company, Berlitz International, Inc., which built its reputation by providing foreign-language instruction to business executives and tourists, now serves over 100 schools nationwide, including a handful of public schools.

Palmetto Elementary School, a public school in Florida, began using Berlitz in 1988 for its Spanish-as-a-second-language program. Berlitz also helps develop the language skills of native Spanish speakers in their home language. The cost of the program is the same as if the school district had provided it, but, says Palmetto principal Paul Papier, the Berlitz program offers more scheduling flexibility, program enhancement options, and easier access to the three certified teachers. "We tell them (Berlitz) what hours to come in. If we were using the district's teachers, we would have to fit into the district's hours," says Papier.[91]

High Tech High School, a magnet public school in Hudson County New Jersey, con-tracts with Berlitz to instruct students in Japanese and Spanish language and culture. According to Principal Karol Brancato, the arrangement expands educational opportunities for her students. "When contracting out, you're getting people who are experts in their particular area. It's hard as a princi-pal to stay on the cutting edge with everything kids need to know because everything is changing so fast."[92]

About the contract with Berlitz, Brancato says, "It's economically feasible for us.... What would we have done with a [full-time] Japanese teacher on staff the rest of the time? We're very happy with Berlitz, and I think contracting out is a real viable option for small programs." Brancato notes that private contracting could run into union opposition. "Fortunately," she says, "we've had nothing but cooperation from our union."[93]

Because Berlitz teachers are not certified, students taking the course do not receive credit toward high-school graduation. However, the students can receive college credit for the course work.

While most of its classroom instruction is contracted with private schools, Science Encounters, which teaches science to 1,500 children a year and employs 30 part-time teachers, has cooperated with two public school districts to offer after-school programs. The public schools provide the classroom space and parents pay the cost of instruction. "If children are turned on to science after school, they will be more interested in what they learn about it in their regular classes," says Robin Gross, director of Science Encounters.[94]

Teachers in private practice are self-employed professional educators who sell their services to public schools, private schools, individuals, or businesses. Though private-practice teaching is common in the private sector, it is just beginning to take root in public schools, where institutional barriers have slowed its acceptance.

The contract relationship provides a corresponding accountability. It is for a limited term. It expires if not affirmatively renewed. And it will be renewed only if both parties find the relationship a successful one.[95]

Currently, districts that cannot afford to hire a full-time teacher for enrichment programs simply go without. With private-practice teachers, however, a district can hire a teacher on a short-term or part-time basis with minimal financial commitment, thereby providing students with exposure to a subject they might otherwise have missed altogether.

There are a number of community-based driver's education services available to public schools. The flexibility that these companies provide is especially useful for small school districts that may not have sufficient student demand to warrant a full-time driving instructor.

Alan Schafer, district administrator for Johnson Creek Public Schools in Wisconsin, contracts for such services, explaining that the fluctuations in the demand from year to year are easily accommodated by using a private provider. The arrangement "gives us the flexibility of having the program or not depending on how many kids sign up, without having to go through lay-offs of staff," he says of his school district, which enrolls 550 students.[96]

Lyle McBride, part-owner of Valley Driving Systems, Inc., a private driver-training firm in California, claims "We can be economical about it because we're doing a large number of students, therefore we can spread those costs around," explaining that his biggest cost is insurance.

McBride cautions schools wishing to contract out their driver-training programs to take an active role in its design. "It must be their program ..... he district must outline in detail the mission they want to accomplish," says McBride.[97]