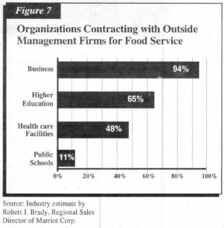 During the 1987-88 school year, the average cost to produce a school lunch was $1.62, including the value of donated commodities.[39] Approximately 20 percent of the average public school lunch is made up of United States Department of Agriculture (USDA) commodities, and the USDA spent $4.2 billion on its school lunch programs and an additional $685 million on school breakfast programs.[40] More than 28 percent of all public school students participated in federal free or reduced-price lunch programs, as did approximately 6 percent of private school students.[41]

Historically, most school dining programs have been district operated, but that is rapidly changing. In 1969, the Food and Nutrition Service of the USDA amended its regulations to permit food-service management companies to contract with public school food authorities and maintain eligibility for the National School Lunch Program (NSLP). Since that time, increasing numbers of districts are turning to private management firms. In 1987, only about 4 percent of all school districts contracted for food services; today, that figure is roughly 11 percent.[42] Still, public schools take advantage of the expertise of food-service companies far less than do businesses and other organizations (See Figure 7).

Since all food served in public schools that take part in the NSLP must meet the requirements of the USDA, quality standards for nutrition are identical for all providers, public or private. But companies that specialize in providing dining services are more likely to be familiar with a host of cost-limiting approaches than a small operation, including the latest techniques in food packaging, food preparation and storage, and menu design. A larger food-service company may also be able to obtain price reductions for bulk purchasing unavailable to some school districts. Larger operations are more aware of menu options that encourage student participation.

Whether using in-house or contracted services, school administrators must ensure the nutritional content of the food served. When it comes to health, nutrition, and safety, private firms have an incentive to meet these requirements: a desire to stay in business. This kind of competitive pressure to perform is frequently missing when districts administer their own food-service operations.

C. Robert Brown, superintendent of the Santa Cruz Valley, Arizona Unified School District, says contracting for food service in Santa Cruz has been a success. "Menus, food production systems, employee training and management have dramatically improved food quality," reports Brown. The district has enjoyed an 87 percent decrease in the cost per meal and a 38 percent increase in the total number of lunches served, turning a $120,000 a year loss into a revenue source.[46]

It should not be assumed, however, that a private provider will excel. When contrating, it is important to establish monitoring procedures to ensure the contractor is performing satisfactorily. Most contracts allow schools to terminate a contract without cause with 30 to 60 days notice, an important safeguard for districts.

Contracting can be structured to avoid widespread layoffs for current workers. The Board of Education of the Norman (Oklahoma) Public Schools entered into a contract for food-service management with a private firm for the 1992-1993 school year. All 87 of the district's food-service employees were offered employment with the private firm, with 84 accepting. According to Superintendent James M. Gray: "Privatization of our food service has not harmed our community. On the contrary, it has been beneficial to Norman."[47]

Some school districts in California, Colorado, Virginia, and Wisconsin are contracting with well-known fast-food franchises – such as Pizza Hut, Taco Bell, Kentucky Fried Chicken, and Subway. In Capistrano, Calif., a conglomerate has remodeled an existing school cafeteria into a multi-franchise fast-food mall. According to William Caldwell, director of food services for the Capistrano Unified School District, "It is unquestionably the most positive thing we've done in the nine years we've been here. The kids love it, and the parents love it." Though some groups have expressed concern about the nutritional value of the fast food, Caldwell says that, "When we did an analysis of what was available, the fat content is the same or lower. There's a lot of food being sold in school cafeterias that is unhealthy."

Fast food has proven popular with students. At Green Bay's Southwest High School in Wisconsin, sales of school lunches have tripled since the program was introduced. The increased participation is generating additional money for the school district, sometimes by returning a profit but more often by reducing subsidies.