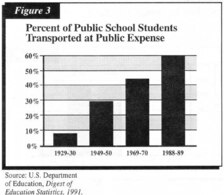 Public school pupil transportation represents an enormous transportation enterprise, with $8.3 billion spent in 1990.[19] Over 22 million students are transported in more than 350,000 yellow school buses traveling over 3.4 billion miles each year.[20] 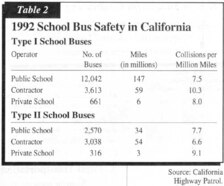 Approximately 60 percent of all public school students are now transported by bus, following a historical trend of increased busing in public schools, as shown in Figure 3.[21] School buses make more than double the number of passenger trips made by all the mass transit buses in the country, and about 70 percent of all pupil transportation is provided by public providers.[22]

The main streamlining strategy for pupil transportation is contracting. Unlike many other industrialized nations, U.S. pupil transportation is largely provided by public providers, with only 30 percent of all school-bus services provided by private contractors. In contrast, virtually all school-bus service in England and New Zealand is provided through contractors, as is 80 percent in Canada.[23]

The top priority of school transportation administrators is pupil safety (see Table 2). Fortunately, school buses, whether operated by contractors or school districts, are an extremely safe form of transportation. In California, for example, where roughly a third of all school bus service is provided by private contractors, school buses traveled almost 1 billion miles between 1990 and 1992 with only one pupil-passenger fatality.[24] Public operators, contractors, and private schools have very similar – and very good – safety records.

The data in Table 2 shows contractors having a somewhat higher incidence of accidents for Type I school buses and a somewhat lower incidence for Type II buses. It should be taken into consideration, however, that a proportionally greater number of contractors operate in dense urban settings and thus operate under more accident-prone conditions. For instance, 100 percent of the bus service in San Francisco is contracted,[25] as is approximately 43 percent of the service in the Los Angeles Unified School District.[26]

School administrators often find contracted service to actually be safer than district operation. In a survey of administrators in Washington state and Oregon, respondents generally believed that contractors were as safe or safer than district operation (See Figure 4). According to Austin, Texas Superintendent Jim Hensley, his district had changed over to a private contractor after rumors of drug use and drug dealing among the district's school-bus drivers led to a police sting operation that resulted in three drug arrests. According to Hensley, after contracting "I had the peace of mind that came with knowing students were riding on newer, safer, better-maintained buses .... Of the approximately 120 drivers employed by the district, about 30 either failed the drug and other tests or refused to take them."[27]

Districts that contract have found that in addition to private sector operating efficiencies, contracting often relieves the burden of capital expenditures. In most cases, the contractor is responsible for purchasing and maintaining equipment. Districts often generate income by selling or leasing their buses and/or bus terminals to the contractor.

For example, in a proposal under consideration (June 1993) in Pinckney, Mich., a contractor has offered to pay $561,000 for the existing fleet and garage equipment while also purchasing a minimum of nine new buses.[28] The school board estimates an immediate savings of $750,000 through privatizing with an additional estimated $70,000-per year reduction in operating costs (cost growth would be limited to 4 percent per year or the annual change in the Michigan Consumer Price Index, whichever is less). Says School Board President Timothy Gladney, "That's $750,000 we don't have to take out of the children's program."[29]

The scarcity of comparison data is partly caused by the fact that many districts tend to significantly underestimate the true, total cost of in-house pupil transportation costs. This problem is so endemic that an entire literature exists to assist public officials in assessing the true cost of district bus operation.[31] A 1993 study by KPMG Peat Marwick was unable to draw any conclusions regarding the relative cost of public and contracted operation because they considered the cost data available from districts to be un-reliable and incomplete., The report stated that when analyzing "Districts' costs, the quality, accuracy, and comparability of the data was highly questionable.[32] When a true cost analysis is conducted, contracting is often found to produce substantial savings.

The KPMG Peat Marwick study examined 30 school districts in Washington and Oregon that had turned to privatization since 1980. The study surveyed the opinions of public officials in districts that used contracting, finding that in the areas of cost and quality, competitive contracting was generally deemed superior to district-operated service (See Figures 5 and 6).

Experience in mass transit provides additional evidence that pupil transportation is a good candidate for competitive contracting. Compared to public operators, competitively contracted bus service was found to generate long-term cost savings of between 24 and 43 percent in Los Angeles and approximately 26 percent in Denver.[33][34]

Piscataway, N.J. Superintendent of Schools Philip E. Geiger has both a Ph.D. in education from Columbia and an MBA from the Wharton Business School. Saying that privatization simply makes "good business sense," Geiger has introduced contracting for bus service, which cut a $4.0 million budget down to $2.5 million a year and brought in an additional $1.35 million capital infusion for new buses. Geiger has also brought in a private firm to manage Piscataway's food services (estimated first-year savings: $500,000) and uses private consultants to assist with teacher evaluations.

Geiger's approach is to treat his students as though they were his customers, allocating resources in whatever way serves them best. Though Geiger's efforts may be popular with parents, they have generated political opposition, and Geiger said that the only problems his district experienced with privatization were "political problems ."[34]

The bottom line? Says Geiger, "We were able to redirect funds from noninstructional to instructional uses and save tax dollars."

In June of 1993, Indiana became the first state in the nation to adopt legislation requiring school districts to consider privatizing their pupil transportation services. The law does not mandate private contracting. However, in order to receive their portion of state pupil transportation funds, school districts must show that they are making "reasonable effort to provide, or to contract with a provider that will provide transportation services at a competitive cost."[35] For the first time, districts that operate inefficiently will be required to explore privatization or risk losing state funding.

In addition to contracting, there are other steps districts can take to reduce transportation costs. Auditing current bus operations in terms of labor utilization, staff training, and preventive vehicle maintenance can reveal potential cost savings.

For example, by staggering school starting times districts can use fewer buses and make more efficient use of labor. Durham County (N.C.) schools saved approximately $225,000 in operating and capital expenses by "pairing" schools in this fashion.[36] Another approach is to streamline school-bus routes. In many cases, bus routes are the result of historical precedent. Computerized school-bus routing can generate efficiency gains for some districts, but a needs/benefits analysis should be undertaken because it can be an expensive project.