Nationally, about one-third of physicians do not accept new Medicaid patients.[26] This is nearly double the proportion of doctors who have closed their practices to new Medicare patients (17 percent) and to new privately insured patients (18 percent).[27] Physicians are four times as likely to turn away new Medicaid patients as they are to refuse the uninsured who pay out-of-pocket (31 percent versus 8 percent).[28] Studies show it is harder for Medicaid enrollees to make doctors’ appointments than it is for uninsured patients who say they’ll pay out of pocket.[29]

The exception to this pattern was cardiology; all cardiologists surveyed in 2009 said they accepted Medicaid.[37]

Graphic 2: Percentage of Physicians Not Accepting Medicaid in Metro Detroit, 2009 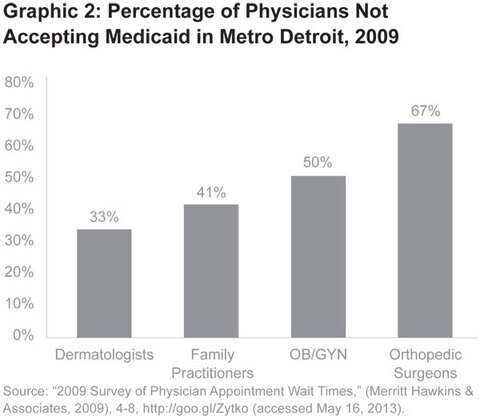