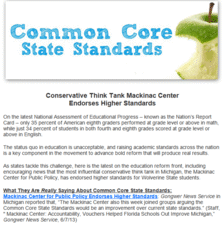 Monday the Foundation for Excellence in Education sent out an email under the masthead “Common Core State Standards” that proclaimed the Mackinac Center “has endorsed higher standards for Wolverine State students.” Although the email never stated that the Mackinac Center actually favored the Common Core, many could have easily been led to believe just that. The email was based on a Gongwer summary (subscription required) of an article I wrote, but unfortunately fails to capture my opinion on Common Core.

In this Viewpoint, I called the Common Core “promising but dangerous.” The promising part is that the Common Core appear to be higher standards than what Michigan currently demands of students and schools, based on the research that I’ve reviewed from the Thomas B. Fordham Institute. And until all parents are able to hold schools accountable by voting with their feet, standards for public schools are necessary — and generally, higher standards are a move in the right direction.

But I also noted, based on research from the Brookings Institution, that “the Common Core will have little to no effect on student achievement.” It’s unlikely that higher standards by themselves will produce the type of improvements I’d like to see for students, and other reforms aimed at attracting, maintaining and developing excellent teachers are, based on the research, likely to have a much larger impact on how well students learn.

It is also true that if the federal government gains control of the Common Core standards, most of the promising aspects of them will likely dissipate. Special interests groups would apply heavy pressure on the U.S. Department of Education to make these standards easier to meet or inclined to their interest. Ideally, I argued, Michigan could raise its standards without risking losing control of these standards to the federal government.

Please read my entire piece and decide for yourself. Common Core is a complex issue, and I attempted to address many of its facets. I did not intend, however, to provide a blanket endorsement of the Common Core that the FEE email may have led some to believe.